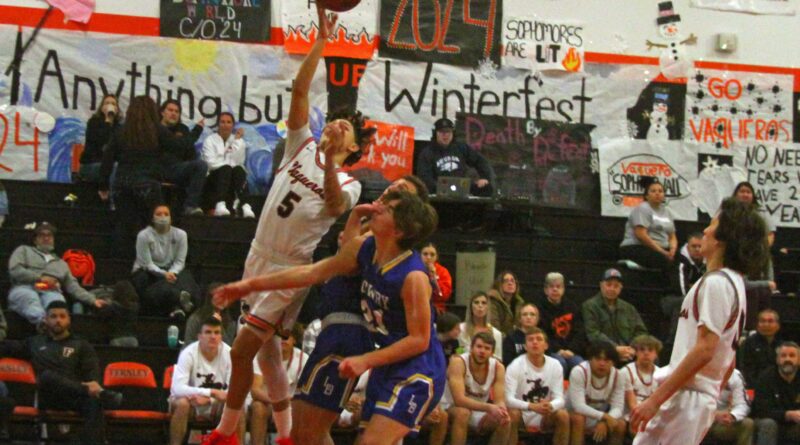 The Fernley High School boys basketball team will finish the regular season Saturday in Dayton, with a chance to clinch the No. 2 seed from the Northern 3A East Division for next weeks region tournament.

The Vaqueros defeated Fallon and Lowry last week, then won a crossover game against North Valleys on Tuesday, setting themselves up with a chance to finish in second place in the East.

The Region Tournament is being held next weekend in Winnemucca. As the No. 2 seed, the Vaqueros would play the third-place team from the West Division, which is most likely to be Hug, in the first round of the tournament.

Against Fallon, Jett Caudle scored 21 points, Josh Cartagena added 17 and Ryan Gamsby finished with 14 as Fernley outscored the Greenwave in all four quarters of the 71-58 win. The led 22-16 after the first quarter and 33-34 at the half.

Saturday, the Vaqueros beat Lowry 54-42 in a game they controlled throughout. They led 11-5 after a quarter and never led by less than four the rest of the way. Leading 26-16 at the half, they maintained the edge, never allowing Lowry closer than 8, with their biggest lead at 50-37 with 4:35 left in the game.

Carson Kingston led the Vaqueros with 22 points, whole both Gamsby and Cartagena scored 12.

“I was extremely pleased with our effort this weekend,” coach Derek Miller said. “We played hard Friday vs. Fallon in front of a packed house on senior night. We challenged the team to match that effort today vs a very physical Lowry team.  Our team stepped up and picked up two huge league wins. I am very proud of the boys.”

Against North Valleys on Tuesday, the Vaqueros rolled to an easy 68-28 win. Gamsby scored 20 points to lead Fernley, with 11 from Garrett Harjo and 10 from Kingston.