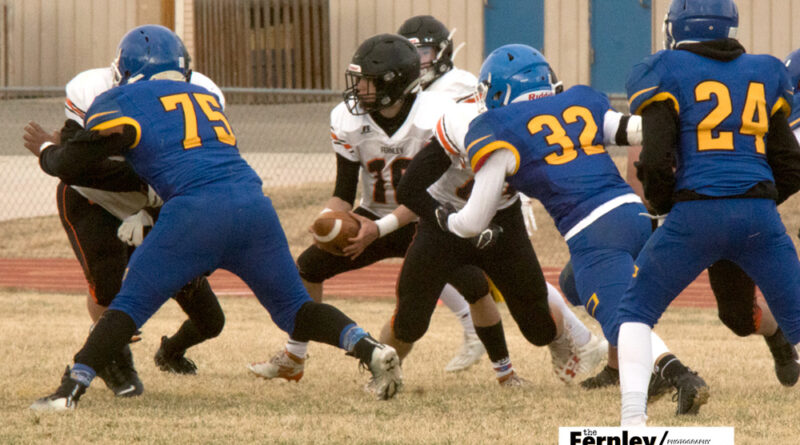 While their season was postponed last fall and most of their workouts over the fall and winter were cut short because of COVID-19 restrictions, the Fernley High School coaches went to school on the finer points of the flexbone offense. Although they’ve been running the offense for the past several years, and for two of them had a direct connection back to the lineage of the offense, coach Chris Ward and some of his assistants took advantage of the time taken away from coaching to attend a few online coaching clinics and study film of some college teams who run the flexbone.

One of the programs they took a deep dive into studying was Eastern New Mexico, which last season featured a rushing attack that finished second in all of Division II football with an average of 348.8 yards per game.

The way this shortened spring season set up seemed to be the perfect time for the Vaqueros to experiment with some of the things the coaches picked up, but so far, three games in, that hasn’t yet been the case. There are a couple of reasons for that, but a big one, especially the past two weeks, has been because they haven’t need to.

The Vaqueros ran up and down the field last week, amassing 535 yards rushing against Lowry, rolling to a 50-21 win. Quarterback Julian McIntyre, slotback Anthony Thompson and running back Brandon Reyes each ran for more than 100 yards and combined for five touchdowns. McIntyre also completed his only pass attempt for a touchdown, while junior Emiliano Alonzo added his first varsity touchdown.

The Vaqueros were clicking on offense from the opening kick. The took their first drive inside the Lowry 10, but fumbled on first and goal. Lowry then went 90 yards in just two plays, a 35-yard pass and a 56-yard touchdown run by Anthony Peterson to draw first blood for Lowry, at 6-0.

It was all Vaqueros from then on.

In the second half, they added an 80-yard run by Thompson, a 7-yard run by Reyes and finished it off with a 9-yard run by Alonzo.

After the 558 total yards against Lowry, the Vaqueros now lead the state in total offense, averaging 429 yards per game, with 358.3 of those coming on the ground. That, despite gaining just 268 yards in their opening game against Spring Creek.

Some of the new things the coaching staff picked up during their offseason research include changes to their passing game, but so far, they needed them. In the first game, that was partly because, without a normal offseason program and only two weeks to prepare, the coaches weren’t sure their offensive line was ready for pass protection. Then, against Elko and Lowry, they have run the ball so well, they haven’t needed to throw.

The Vaqueros play Fallon at 3 p.m. Saturday, in the first meeting between the teams since the Vaqueros beat Fallon in the 2019 state championship game.

“I’m sure they’re going to come ready on both sides of the ball, and special teams,” Ward said.

Fallon so far has rolled over Spring Creek 44-7 and Elko 33-0. In those two games, they’ve looked much like the explosive offense they’ve had the past few years.

“They’re big, athletic, they throw the ball well, they’re real good,” Ward said. “I hope we can hang in there with them.”

The Vaqueros, meanwhile, have seen their offense improve by leaps and bounds in heir first three games, despite a rebuilt offensive line. Although they aren’t as big and are inexperienced at center and guard, they are more athletic at tackle than they have been the past few years, which they have capitalized on by taking advantage of different aspects of their offense.

But they haven’t yet had to delve into some of their new offensive tweaks. Ward hopes they’re ready if they do.

“We get them all practiced up during the week,” Ward said. “When the time comes, we hope it works.”