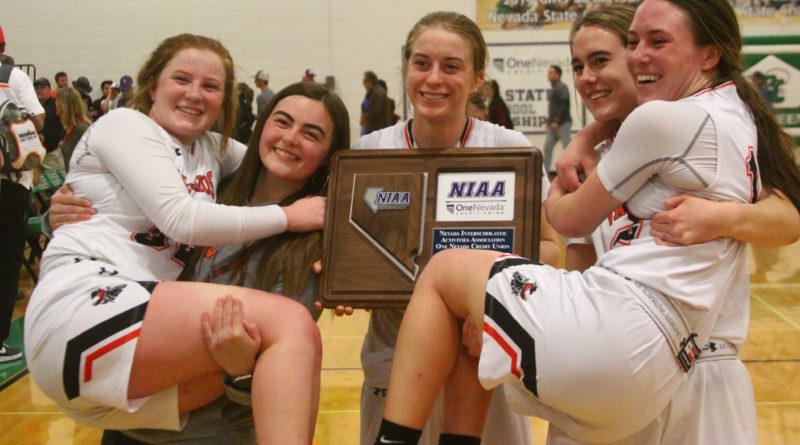 After going 18-0 to claim the regular season Northern 3A title and surviving a couple of nailbiters to win the league tournament, they will now try to win the first state championship in girls basketball in school history.

The Vaqueros will face Truckee at 6:50 p.m. Thursday at Reno High School against Pahrump. Truckee will face Moapa Valley in the other semifinal, with the winners playing for the championship at noon Friday at Lawlor Events Center.

The seeds of this championship run were planted at Fernley Intermediate School, sprouted at Silverland Middle School and reached full bloom this season at Fernley High School.

Five senior members of this year’s Vaquero squad first began playing basketball together in intramurals in fifth and sixth grades at Fernley Intermediate. Several of them also played together with a Reno Ballers AAU team. They then went undefeated and won the Sagebrush League championship as both seventh and eighth graders at Silverland, while being coached that eighth grade year by Tom Kingston, who is in his first year as head coach of the Vaqueros this season.

“We were undefeated in middle school, but that’s middle school,” senior Jaiden Sullivan said. “It was what we’re dreaming of doing.”

While their first three years at the high school level were increasingly successful, it’s all led to this, where a group of players who have played together have blended with a handful of younger players who’ve made important contributions

“I think we just finally realized this was our last opportunity to do this and we know that we had great potential, and our coach encouraged us and has a lot more confidence in us, so I think we just played more freely and we finally just put it all together,” senior Celeste Condie said.

The Vaqueros this year have proven to be equally capable of dominating foes both offensively and defensively. With a starting lineup of five similarly versatile players who can shoot, drive and pass, the Vaqueros can cause matchup problems for almost any opponent. Sophomore Willow Jacobson is the team’s leading scorer with 12.8 points per game, but the other four starters average between 7.2 and 10.6 points per game. Six players average more than one assist per game, and 10 members of the squad have made 3-pointers, with three of them making more than 20.

Defensively, the Vaqueros often use fullcourt pressure to disrupt opposing offenses, and as a team they average 18 steals and 16 deflections per game. Five players also average more than three rebounds per game.

With that kind of balance, it’s often a different player every game who leads the team in scoring and other statistical categories. Senior Katelyn Bunyard said the players legitimately don’t care who scores the most points or who gets the most credit.

“Whoever is on is on, and we’ve all just accepted our roles on this team, and that’s what makes us have such good chemistry,” she said.

That chemistry is a large part of what Kingston and the players attribute to their success this season.

“We haven’t had drama at all this year, and it seems like every year you get drama on a team Kingston said. “These guys are just so awesome people and they care so much about each other, that they just play together and work together.”

That’s not to say things don’t occasionally get chippy, as it does any time a group of competitive people spend significant amounts of time together.

“We bicker from time to time, but this team is one of the only teams I’ve been on where we don’t have drama,” Sullivan said. “We’re all friends and we all get along pretty well.”

The team’s success is all the more impressive considering that two of the seniors have been injured all season and haven’t been able to contribute like they’d have wanted. Reese Jones suffered a hand injury that limited her to just four games this year, while Erica Kingston has been fighting through a knee injury that will require surgery after the season.

“These younger girls that are on the team have stepped up huge,” Tom Kingston said.

“We’re still in the season so it doesn’t really feel real yet, to me at least,” Sullivan said. “They kind of build like in your head, but when it happens, it’s like, ‘Oh my God, we just did that.”

It’s a feeling this group has had together since middle school, and one they hope to share again Friday afternoon.