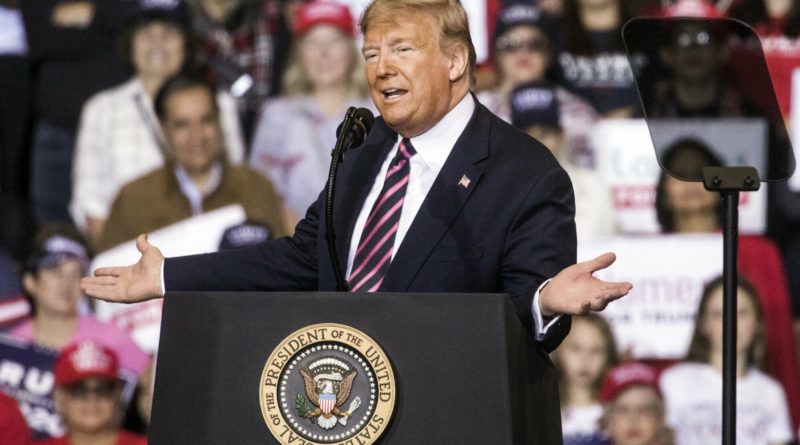 President Donald Trump threatened in a tweet Wednesday morning to withhold federal funding from Nevada should it proceed with its mostly mail primary election, alleging that the state’s decision to do so is “illegal,” though he didn’t offer any specifics about why he believes that is the case.

Trump said in the tweet, which he also directed at the U.S. Department of the Treasury and acting budget director Russ Vought, that the mostly-mail election would result in voter fraud and is tantamount to an effort by the state to “cheat in elections.” The state’s Republican Secretary of State Barbara Cegavske announced in March that next month’s primary election would be held almost entirely by mail, with limited opportunities for in-person voting, because of the ongoing coronavirus pandemic.

“State of Nevada ‘thinks’ that they can send out illegal vote by mail ballots, creating a great Voter Fraud scenario for the State and the U.S. They can’t! If they do, ‘I think’ I can hold up funds to the State. Sorry, but you must not cheat in elections. @RussVought45 @USTreasury,” Trump tweeted.

Nevada Secretary of State Barbara Cegavske’s office issued a statement saying the decision to transition to a mail-in election was lawful, and was done to ensure the election would happen on schedule and to preserve voters’ and poll workers’ health. Officials also highlighted laws prohibiting ballot harvesting and safeguards to prevent voter fraud, including barcode tracking and signature verification.

“For over a century, Nevadans, including members of the military, citizens residing outside the state, voters in designated mailing precincts, and voters requesting absentee ballots, have been voting by mail with no evidence of election fraud,” the office said in a statement. “In a recent court order, a federal judge ruled that Secretary Cegavske lawfully exercised authority granted to her by state law to call for a primary election conducted primarily by mail ballot.”

The plan for a mostly mail election has been subject to several legal challenges from both sides of the political spectrum, including one from Texas-based True the Vote, a conservative voting monitoring group. A federal judge blocked the group’s first lawsuit on the grounds that it lacked standing.

It filed an amended complaint a week ago challenging an agreement between Clark County election officials and national Democratic groups that makes some concessions, including sending ballots to both inactive and active registered voters. In the rest of the state, ballots will be mailed only to “active” registered voters who have verifiable addresses, although both categories are eligible to vote.

A hearing on that is scheduled for Friday.

A group of Democratic-affiliated organizations, including the Democratic National Committee, the Democratic Congressional Campaign Committee, and the progressive political nonprofit Priorities USA, had also initially sued against the all-mail primary, though they dropped their legal challenge after Clark County election officials agreed to expand in-person voting sites.

U.S. Sen. Catherine Cortez Masto, in a tweet, called Trump’s threat to withhold funding “outrageous” and suggested that he had started ingesting bleach, which he has previously suggested could be used to treat coronavirus.

“@realDonaldTrump, perhaps you’ve moved on to bleach and it’s even further impairing your judgment. It’s clear Nevada is doing the right thing and your threat to withhold federal support, especially during a pandemic, is outrageous,” Cortez Masto said.

Rep. Dina Titus, in a tweet, noted that Nevada’s mostly mail primary was actually the decision of its Republican secretary of state, Barbara Cegavske.

“Trump is threatening to harm Nevadans because our Republican Secretary of State is making it easier for them to vote,” Titus said. “The President doesn’t care about the Constitution or apparently Nevadans’ safety. He’ll do anything to distract the public from his incompetent COVID-19 response.”

Democratic Gov. Steve Sisolak said on Twitter that the state was using its rightful authority to run elections and Trump’s tweet was out of line.

“Nevada is widely recognized as being a national leader in election administration, and we will continue to support the safest, most accessible election possible under these unprecedented circumstances,” he said. “For the President to threaten federal funding in the midst of a pandemic over a state exercising its authority to run elections in a safe and legal manner is inappropriate and outrageous.”

Officials from the Nevada secretary of state’s office did not immediately respond to early morning messages seeking comment.

Trump has also threatened to withhold federal funding from Michigan over its plans to send mail-in voting applications to all voters in the state.

Republican Senate Leader James Settelmeyer took questions while heading to the Douglas County Clerk’s Office — the agency had flagged his daughter’s mail-in ballot for a signature mismatch and they were trying to get the issue resolved. The lawmaker said it gave him confidence that the clerk’s office was keeping an eye on signature matches, which are one of the main ways election officials are verifying the authenticity of mail-in ballots.

“I think the secretary of state has done a good job with the cards she’s been dealt,” Settelmeyer said of Cegavske, a fellow Republican, noting that she directed the state to pursue a mostly-mail election after she was petitioned to do so by election officials in all 17 counties.

Settelmeyer echoed some of the concerns in the conservative group’s lawsuit including that in Clark County, ballots are being sent to inactive voters as well as active ones, leading many to end up in the trash if they go to a wrong address and creating opportunities for bad actors to intercept them.

“Could I prove there’s fraud? No. Could it create more opportunities? Absolutely,” he said.

As for the allegations in Trump’s tweet, Settelmeyer said “I have no idea of it being illegal,” adding that he believed the secretary of state had authorized counties to carry out elections by mail.

And on the point of withholding funds if the election proceeded by mail, the senator asked whether the president might be referring to the general election, suggesting that it would be impractical to change course on the primary now because “probably about half the people who are going to vote” had cast ballots by now.

Assembly Republicans weighed in with a tweet, saying “the real issue with our primary is the backroom deal Dems made in Clark County to weaken established election procedures enshrined in NV’s laws and replace them with an unaccountable system for gathering votes.”

Assembly Republican Leader Robin Titus said she wasn’t sure what money Trump was referring to when he talked about withholding funds. She said she supported the move to a mostly mail election for the primary based on concerns about the spread of coronavirus.

Her concern is with Clark County acquiescing to some of the demands of Democrats — something she said has led to “disappointing” outcomes — rather than what she’s seeing with how rural county clerks have been handling mail-in ballots. But she said she doesn’t want to continue the format in the fall, saying even postal workers have raised concerns about excess ballots arriving at homes when the voter has moved away.

“I think the president has every right to be concerned about it. Our primary has been an example of why he should be concerned,” she said. “I think his concerns are legitimate.”

The Republican National Committee also issued a statement critical of Clark County’s process, asking for Attorney General Aaron Ford to investigate whether the Open Meeting Law was violated when commissioners made the agreement “to capitulate to the Democrats’ demands without notifying, broadcasting, or allowing citizens to provide their input.”

Asked for comment, Ford’s office said Wednesday morning that it was processing the request.

“We received the complaint minutes ago. It has been forwarded to our Boards and Open Government Division for review and consideration,” a spokeswoman said.

Clark County and state elections officials agreed to the following changes after Democrats sued to secure them:

For information on why Nevada has opted for a mostly-mail election and what safeguards election officials are implementing to prevent voter fraud, read this Q&A with Wayne Thorley, deputy secretary of state for elections.