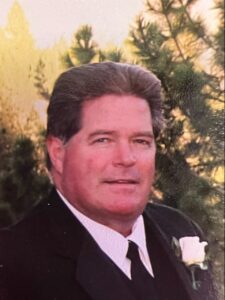 Tracy Darrell Ceresola was born November 14, 1952, and passed away unexpectedly on January 31, 2022 at his home, leaving behind a large and loving family and circle of friends.

Tracy was proud to be a 3rd generation native Nevadan, and proud to call the Silver State home his entire life. Born at St. Mary’s hospital in Reno into a large ranching family, he grew up in Wadsworth and graduated from Fernley High School, where he excelled in basketball. But Sparks is where he spent most of his adult life, and is where he and Gini, his wife of over 40 years, called home.

Tracy enjoyed a life of passion, adventure and fun. His four children and many grandchildren filled his life with joy, and he loved coaching and watching them in various sports over the years. In addition to his family, he loved playing music as a drummer in several bands that played all over northern Nevada, bringing down the house with country and rock favorites. Another passion of his was riding across the west with Gini on the back of a Harley, and in 2009 they accomplished the feat of traveling to every single Nevada town and city on the motorcycle – a journey that brought lasting memories and some unforgettable stories.

But as the adage goes, home is where the heart is, and for Tracy that was no different. He enjoyed many traditions with his family at home, including teaching and passing on to his children and grandchildren how to make the top secret, award-winning homemade ravioli that was a hit at family gatherings over the years. He also boasted quite the green thumb and was known for his enviable tomato crop every year. And when he was at home, Tracy loved to spoil his grandchildren, but he also loved to spoil his dogs and grand dog nearly as much.

Tracy spent a long career in the beverage industry, working for Luce and Sons in Reno for over 30 years and tending bar part-time in local haunts as well. After he retired, he was able to enjoy the last several years doing what only the most fortunate among us get to do – spending time with his family, traveling with his wife Gini, tending his garden, spoiling his grandkids and dogs, and watching his family grow and flourish.

A celebration of life will be held on Sunday, February 27 at 1 p.m. at the Reno Elks Lodge, located at 597 Kumle Lane in Reno. Please join his family and friends to honor and remember Tracy, share stories and memories, and celebrate a life well lived.