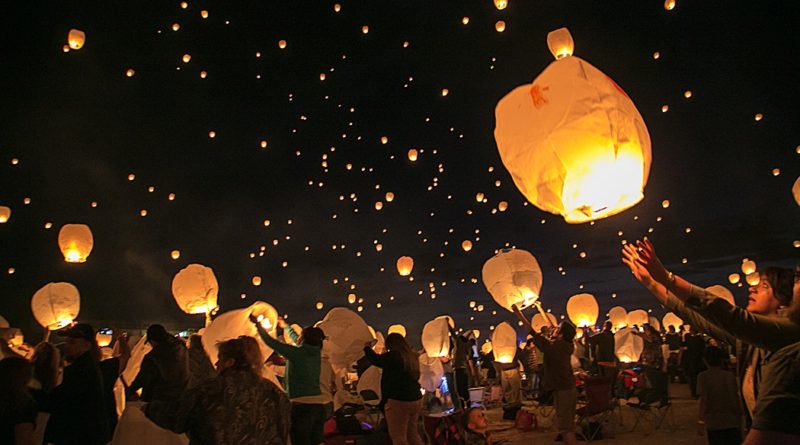 Hundreds of lanterns rose through the night sky Saturday night, filled with the hopes and wishes of thousands of people who gathered for Fernley’s second Lantern Fest at 95A Speedway.

Saturday’s celebration was the first of the two-day event, which concludes with another release after darkness falls Sunday night.

The Lantern Festival originated in China about 2,000 years ago during the Eastern Han Dynasty. Many current Chinese customs incorporate the mandatory lighting of the lanterns, setting off fireworks, dragon dances and walking on stilts.

This weekend’s event is the second time Lantern Fest has been held at 95A Speedway. Organizers brought the event back after reporting an excellent turnout at the first event last October.

The Lantern Fest brings thousands of people together who release the lanterns, built like miniature hot air balloons. The lanterns are approximately three feet long and are constructed of a biodegradable white paper. The lantern’s “basket” is held in place by small wires and holds the flammable material. The flame travels about one-third of the way up into the lantern and the hot air it produces causes the lantern to rise. The lantern is decorated using crayons by the festival revelers. These decorations may include drawings, family names and prayers, and are meant to signify the sender’s hopes and wishes, whether for for good luck, better weather or celebrating the life of a loved one.

Attendees at Fernley’s event Saturday enjoyed mild winds and cool temperatures, live music, jugglers, fire spinners, stilt walkers, an egg toss and roasting marshmallows while they decorated and then released the lanterns into the night sky. Local vendors provided all the food and drink the crowd desired.

Although an exact attendance count was not available, organizers said Saturday’s event sold out of 7,000 tickets and a second day was added. As of last Tuesday, organizers said about 3,500 tickets for Sunday had been sold, with revelers from all over the West visiting Fernley to attend the celebration.

Nancy Lee brought fifty family members and friends from San Francisco. Grandfather Porfirio Reyes, from Sanger, Calif., and his family came to celebrate the birth of his 5-month old grandson, Santino Josiah. Rachel and Montana Loveday from San Jose, Calif. were here because last year, their family came without them.

As the sun ducked behind the mountains and day turned into twilight, some of the revelers could not wait and released a few, lonely, single lanterns into the waiting sky. The event sponsors chided these early releasers, imploring them to wait for the main event.

When night finally blanketed the Speedway, the festival goers were given instructions on proper lantern inflation. Then, after all the lanterns were finally lit and inflated, a countdown from 10 started. All at once, hundreds of lanterns slowly ascended into the night sky. Higher and higher the lanterns climbed until they were like stars surrounding the half moon instead of earthly, man-made lanterns.