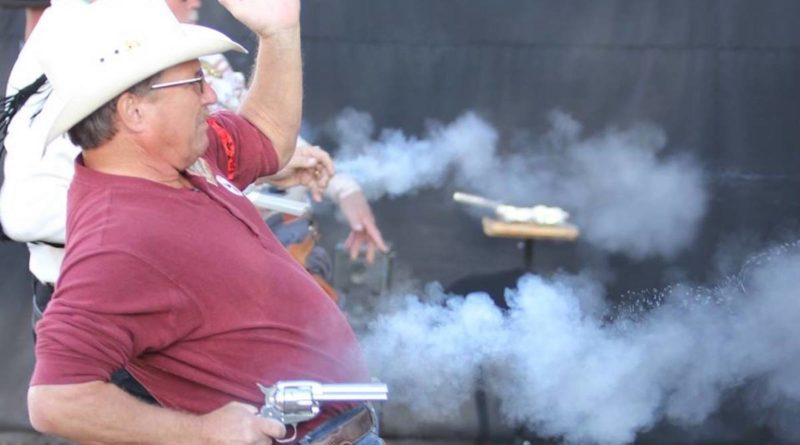 The Friday through Sunday event has been coming to Fallon for 12 years.

The Cowboy Fast Draw is a western-themed shooting sport which features wax bullet ammunition allowing competitions to be held almost anywhere. Safety is always the highest concern. Six-guns and holsters are from the old west time-period and the competitors dress in period themed clothing as well. It’s a very colorful sport with shooters adopting aliases to compete under, in the spirit of the Old West.

The championship event attracts more than 200 of the fastest guns from across the United States and Canada, this year again also brings competitors from Switzerland and France. The Outdoor Channel has placed the event on the schedule again covered by their long-running series, Shooting USA. The event has also been covered by Northern Nevada Media, including all four network affiliates, the History Channel and the Travel Channel.

The youngest person to ever win the Overall Title of Men’s Fastest Gun Alive (at age 14) occurred in 2011. Todd Vonfeldt Jr. a.k.a. Oregon Ranger, came from Portland, Oregon. Now a 5-Time Champion, Oregon Ranger will be in Fallon to defend his title once again. The Ladies FGA Title will be defended by Kassi Bevill a.k.a. Madame K of Conroe, Texas.

Men and ladies compete in separate divisions, as do youth shooters. About one-third of the competitors at the Fastest Gun Alive are women and youth shooters. Educating as many people as possible in the safe and proper use of firearms is one of the Cowboy Fast Draw Association’s primary goals. CFDA the sport’s sanctioning and rules authority has established Range Officer Training, and a Youth Safety Training Programs.

According to CFDA’s director and event host, Cal Eilrich a.k.a. Quick Cal (Shooting Sports Legend & 17-Time World Fast Draw Champion), who moved the event from Deadwood, South Dajota, to Fallon in 2008, “The Fastest Gun Alive, has turned into a major tourist attraction for Fallon. Hundreds of competitors and vendors from across the nation spend most of a week in Fallon. Plus, spectators travel from Northern California, Nevada and several other states to watch a great competition and learn about our sport.”

The area near the multipurpose building will also feature a number of Vendors, plus Great Basin Pistoleros Cowboy Mounted Shooting and a Classic Car Show on Sunday.

The competition is an elimination format with the bouts determined by “luck of the draw.” Six-guns are never pointed at anyone; instead, both shooters stand side by side with each having a 17” metal plate target 15’ downrange. A digital timer signals a start light on each target simultaneously and both shooters must react to the light, draw, fire and hopefully hit their target faster than their opponent. Hip shooting these targets at competitive speeds is very challenging, as speed and accuracy are equally balanced.

According the Quick Cal, “It’s not always the fastest shooter who wins, but rather the shooter who keeps a cool head and a hot hand.” It takes three winning shots for a competitor to guaranty moving to the next round, the loser receives an ‘X’ and once a fourth X is received ,they’re out of the running for the coveted title of “The Fastest Gun Alive”.

White lithium grease is applied to the 17-inch plates which shows shooters, officials and spectators where the targets are hit. The Magnificent 7 Finals on Sunday is very exciting to watch —sometimes a match can be decided by as little as one thousandth of a second. Spectators are welcome and have an excellent view to see the all the times fired on audience displays, which are highly visible. Strike up a conversation with a Gunslinger and they’ll explain the whole thing to you.

The main event’s preliminary rounds are held on Friday and Saturday, between 9 a.m. and 3 p.m.. Sunday will feature the Magnificent 7 World Championship Finals featuring the Top 7 Youth, Ladies, and Men, beginning at approximately High Noon to 2 p.m.

The admission is free on each day. On Saturday only, visitors can even Try Cowboy Fast Draw!

For information on the sport and the Fastest Gun Alive TM , including informational videos, go to www.cowboyfastdraw.com.