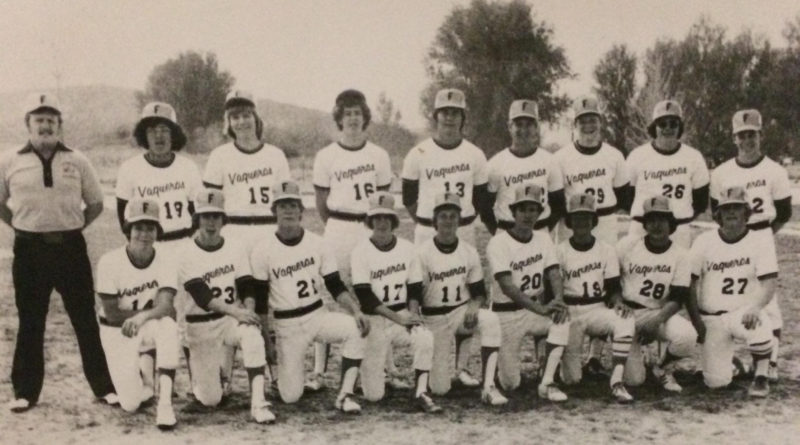 Baseball was mostly an afterthought when Dan Armstrong arrived at Fernley High School in 1975, just as the boys track team was in the midst of one of the best stretches in state history.

This year marks the 40-year anniversary of Fernley’s first league title in baseball, one that perhaps nobody, except Armstrong, thought possible.

Armstrong was hired at Fernley in 1975, coming from McDermitt, where he had coached championship football and basketball teams.

While the track team was in the middle of its run of seven consecutive state championships between 1973 and 1979, Armstrong said the baseball team had to clear weeds in order to play on a dirt field, where the Out of Town Park is now.

Armstrong never did become head football coach, but in 1976 was named baseball coach.

“The principal who hired me said we’re a track school, so your job is to roll the balls out and keep kids off the streets,” Armstrong said. “I looked at it and thought he didn’t understand me.”

Armstrong ruffled some feathers when he cut several older players in his first year, fielding a team made up of 14 freshmen and sophomores, led by pitcher Ron Gallaway along with senior pitcher Harold Wood and catcher Richard Hill.

“I cut a lot of juniors and seniors that first year and kept bunch of freshmen and sophomores so I could change the culture, and that worked out,” Armstrong said.

That team won 11 games and placed second behind eventual state champion Battle Mountain, with pitcher Harold Wood throwing a “no-hitter” in an extra-inning loss to the Longhorns in the last game of the season.

But the seeds of what bloomed the following season had been planted, as the team began to develop.

“The first game we played that year in conference we lost to Battle Mountain 20-0, and in the last game, Harold Wood threw a no-hitter for 8 innings and lost 2-1,” Armstrong said. “Everyone coming back knew what we could do.”

The Vaqueros won 15 games the next year, and beat the defending state champions, Battle Mountain, in the playoffs. They eventually lost in the state finals to Moapa Valley.

“We just ran out of pitching and I ran us out of two innings,” Armstrong said. “I got two guys thrown out, one at third and one at home.”

The top performers on the team were third baseman Steve Zelke, who batted .586, outfielder Chris Draper, who batted .406 while stealing 25 bases, and pitcher Ron Gallaway who won 7 games with a 1.06 ERA, striking out 130 batters in 89 innings. Second baseman Barry Gallaway led the defense with a .953 fielding percentage.

The Vaqueros made high school history when Crystal Navarrete, a girl, became the first girl to play on a boys varsity team in Nevada. Navarette’s family moved away during the season, which was a key defensive loss to the team.

Armstrong and many of the players have stayed in touch with each other over the past 40 years.

They will be hosting a memorial golf tournament August 26 for sophomore all-league second baseman Barry Gallaway, who died of cancer Jan 29, 2016.