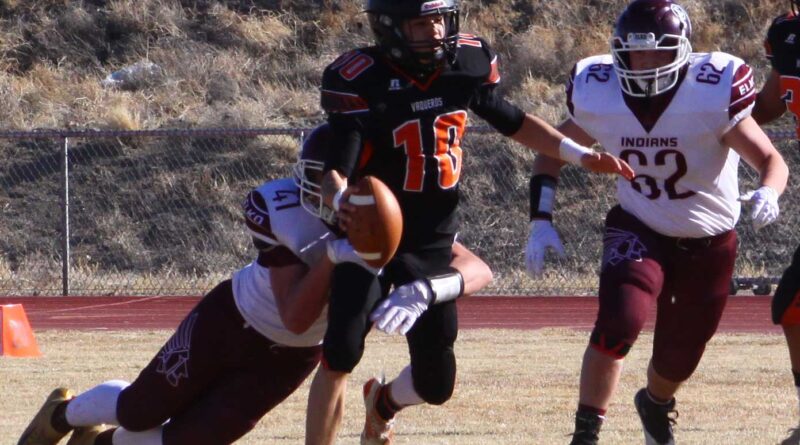 The second time out was decidedly better for the Fernley High School football team.

The Vaqueros bounced back from an opening loss to Spring Creek with a 32-13 win over Elko last Saturday at Silver Stage High School.

The Vaqueros dominated the second half, outscoring the Indians 20-0 after halftime to even their record at 1-1.

Julian McIntyre ran for two touchdowns and passed for another to lead a Fernley offense that operated much more smoothly than it had the previous week against Spring Creek.

Ward attributed the better offensive performance to the improvement of the offensive line, which struggled to recognize their blocking assignments when Spring Creek came out in an unfamiliar front. Elko likewise tried to confuse the Vaqueros with changing defensive fronts, sometimes with three down linemen, sometimes with just one, often shifting their linemen just before the snap.

“Huge improvement,” said coach Chris Ward. “They do different things defensively, they move around quite a bit, and our guys, up front especially made a big improvement, not getting panicked, not getting worried, just use your rules, and getting after them.”

The Vaqueros took advantage of a big break to turn the game around. With a 13-12 lead, Elko had the ball on fourth-and-goal at the Fernley 2-yard line, when Kaiden Cervantes tried to throw a jump pass to tight end Jarin Groen. But safety Austin Roberts read the play and dove in front of Groen to intercept the ball at the goal line.

Instead of trailing by a touchdown, the Vaqueros took possession at their own 20 and promptly drove 80 yards in nine plays to take the lead on a five-yard touchdown run by Anthony Thompson. The two-point conversion pass from McIntyre to Carson Kingston put the Vaqueros up 20-13.

After Elko went three and out on the next possession, the Vaqueros seized control of the game on a 53-yard touchdown pass from McIntyre to Kingston to make it 26-13.

On Elko’s next drive, the Indians were threating again, but Kingston intercepted a pass from Lincoln Ratliff at the goal line and returned it to the 50-yard line. The Vaqueros were able to control the ball for most of the rest of the quarter, scoring on a 1-yard run by McIntyre with 1:00 left in the game for the final 32-13 score.

The Vaqueros looked much sharper from the opening kickoff. They took the opening possession of the game 64 yards in 10 plays to take a 6-0 lead on a 10-yard touchdown run by JR Reyes. They drove 59 yards on their second possession, but came away without points when McIntyre was stopped for no gain on fourth and five from the Elko 13.

Elko took its next drive 87 yards for the go-ahead score, with the help of two fortunate plays. On third and 16 from their own 7, Ratliff lofted a deep pass for Manny Alvarado, who fell down, but caught the ball while laying on his back at the Elko 40. Three plays and a false start later, Elko was forced to punt on fourth down, but the kick was short and hit a Fernley blocker in the foot. Elko recovered, and eventually scored on a 4-yard run by Ratliff to take a 7-6 lead.

The Vaqueros wasted no time getting it back, needing just five plays to go 66 yards. Anthony Thompson ripped off a 15-yard run, Roberts took a short pass from McIntyre for 16 yards, Thompson followed a 3-yard loss by McIntyre with a 22-yard gain, and McIntyre finished the drive with a 10-yard scramble up the middle on a busted pass play to put the Vaqueros back up 12-7.

Elko took the lead into the half on another fortunate pass play. First, the snap went over Ratliff’s head, then while scrambling he lofted a high arcing pass toward tight end Brigham Johnson, who got position on a Fernley defender and caught the ball, then took it the rest of the way for a 35-yard touchdown.

Ward likened the play, and another similar play earlier in the first half, to the old game of 500-Up, where players battle to catch the ball thrown high in the air.

“Those big loopers, we just kind of got lost back there,” he said.

Ward was otherwise pleased with the team’s defensive effort and he liked how the Vaqueros controlled the second half.

“They got after them in the second half,” he said. “They did a tremendous job in there.”

Ward was also appreciative of being able to play at Silver Stage, where parents were allowed to watch.

“They deserve to watch their kids play,” he said. “I wish more of our town people could come in and see them.”