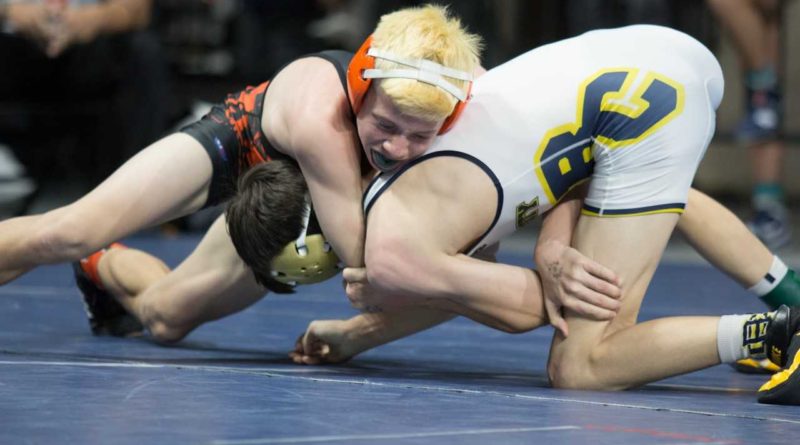 As a team, Fernley had six individual qualifiers and finished seventh among 16 teams scoring points with 51 points.

Lonnie Slapinski was the No. 2 seed at heavyweight. He pinned Chance France of Cheyenne in 2:29, then pinned Wyatt Hillius of Virgin Valley in 3:30, before losing 12-0 to Ben Dooley of Fallon in the championship match.

“Lonnie had a great senior season. He wrestled very well at state, dominating all opponents until the finals,” coach Scott Gillespie said. “I am very proud of all the strides he has taken as a wrestler and a person.”

Having defeated the eventual 4A state champion from Reed earlier in the year, Slapinski and Dooley solidified themselves as the top heavyweights in the state at any level.

Richards was the North No. 3 seed at 182 pounds. He beat Cole Walker of Pahrump in 1:14, then was pinned by K-Ci Slade of Spring Creek in 5:00. In the consolation bracket, he pinned Adam Clary of Boulder City in 19 seconds, and claimed third place by pinning Anthony Peterson of Lowry in 3:23.

“Gabe is a phenomenal person and leader. He works harder than almost any high school athlete I have ever coached,” Gillespie said. “He ended up pinning the Peterson kid from Lowry who had beat him on their three previous meetings. Gabe stepped it up when it really counted for him. He will be sorely missed next year.”

Caulk was the North No. 3 seed at 120 pounds. He was pinned in 5:36 by Garrett Leavitt of Boulder City in 5:36 in his first match. Then he beat Angel DeSantiago of Virgin Valley by forfeit, beat Xavier Gonzalez” of Desert Pines 11-0 and lost a rematch with Leavitt in the third place match, 10-0.

“Jared had to wrestle a very tough opponent from Boulder after he was upset in the semifinals,” Gillespie said. “Jared is a never give up type kid who uses every second of his blood time in almost every match. He will be counted on to lead our team next year.

Setriano Piroddi was the North’s No. 1 seed at 220 pounds. He pinned Elijah Wade of Desert Pines in 3:47, but then lost by pin to Morgan White of Pahrump in 5:38 and to Dayden Payne of Virgin Valley in 4:22.

“Wee Man also did a great job. Wrestling is the kind of sport where no lead is safe and Wee found that out,” Gillespie said. “It is hard to see a few guys you have already pinned stand on the state placer podium instead of you. I am sure Setriano will use that to fuel his efforts over the next few years.”

Carter Chapin was the North No. 3 seed at 152 pounds, He pinned Tristan Maughan of Pahrump in 1:32, but lost his second match to Beau Chacon of Spring Creek by a technical fall in 4:23, then he was eliminated with a 3-2 loss to Jimmy Dunagan of Boulder City.

“Carter Chapin lost a heart breaker by one point to get into the medal rounds,” Gillespie said. “Carter is a great wrestler and leader. Nobody outworks him. He will do great things next season.”

Corbin Henderson was the North No. 3 seed at 106 pounds. He lost his first match 13-6 to Curtis Brown of Boulder City and his second to Issac Agabin of Cheyanne 8-2.

“Corbin Henderson qualified for state as a freshman and did an awesome job for us,” Gillespie said. “He is already a great athlete and he will continually get better as his career goes on.

“As a whole I am very proud of all of our wrestlers and their efforts throughout the season,” Gillespie said. “Our team is super young, only graduating 3 seniors, and we will come back bigger and better next year.”