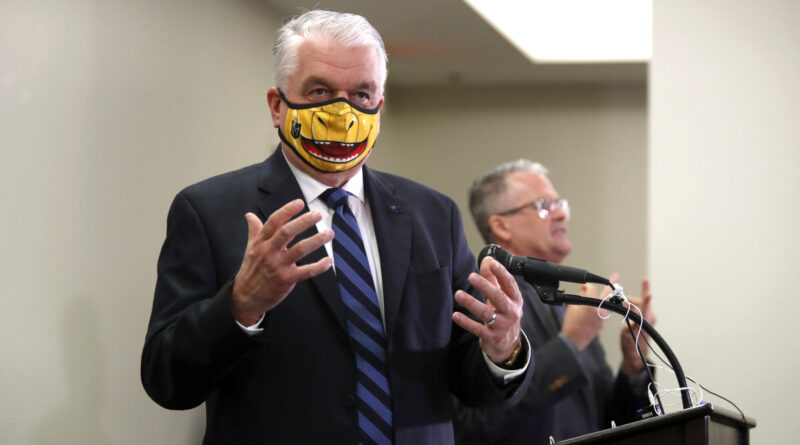 Conventions, sporting events with live audiences and large church gatherings will be allowed to resume once again after Gov. Steve Sisolak announced that he is raising the limit on public gatherings from 50 to 250 people — and even higher for some of the state’s largest venues.

Sisolak, at a press conference in Las Vegas on Tuesday, said that declines in the states COVID-19 test positivity rate and hospitalizations since a peak over the summer warranted an increase in the 50-person maximum of gatherings, which has been in place since May. The new directive will take effect just after midnight on Thursday.

“We continue to watch numbers for signs of progress and whether the current mitigation measures that are in place are having an impact,” he said. “I’m pleased to say the answer is yes, they are.”

But the governor’s announcement comes as the number of new COVID-19 cases reported each day has been on the rise. The seven-day average of new reported cases was 458 on Tuesday, up from a low of 267 two weeks ago but still significantly below the high of 1,176 seen in July.

Sisolak, asked about those trends, said that decisions have to be made “with data in advance” and said that he is confident that the test positivity rate is “back on track” and “will continue to come down.” According to the state’s COVID-19 dashboard, the seven-day average daily test positivity rate was 8 percent, slightly up from a low point of 6.6 percent a week and a half ago.

“If we notice an undue uptick in our positivity and our hospitalizations, we maintain the flexibility to dial some of these things back,” Sisolak said. “But I’m hopeful that won’t be the case.”

Under the new guidance, venues that hold 2,500 people or fewer will be allowed to welcome 250 people or 50 percent of their capacity, whichever is fewer. Attendees will be required to sit in their own seats during the event with no-standing-room audience allowed, though their seats do not need to be assigned or reserved in advance.

The limit also only applies to each room, meaning that a church could spread out its congregation between its sanctuary and auxiliary meeting rooms so long as each room individually meets the 250 person or 50 percent limit, whichever applies.

Sisolak said that the lifting of restrictions was meant as a signal that the state is “not only open for business,” but is also taking the proper safety precautions necessary to avoid a “rollercoaster” of rising and declining COVID-19 metrics that could give visitors second thoughts about visiting the state.

“We will open up in a safe, constructive manner, where you will feel safe, your families will feel safe, and all your event participants will feel safe,” he said. “When it comes to Nevada, the health and safety of our residents, workers and visitors who come to the state is too precious to manage the gradual reopening in any other way.”

Sisolak echoed the state’s previous messaging about being the “gold standard” for the tourism industry. The governor said he hopes the new directive and guidance gives businesses reassurance about planning events here and “if they’ve got one already booked for January, February, there’s no need to cancel.”

He said the decision to set the capacity level at 250 was because of economies of scale, and that certain facilities or businesses wouldn’t be able to reopen if that capacity level was any lower.

“We had to come up with a number,” he said. “Two hundred and fifty, we thought was reasonable, it’s not too big, it’s not too small, it can be doubled as you go to a second venue, and hopefully it’ll work.”

Under the expanded 10 percent capacity limit for large venues, each section of 250 people would be required to have its own entrances and exits and must minimize the use of shared concession stands, restrooms and merchandise stalls between sections. Attendees will be required to have a reserved or assigned seat in advance, and staff may only work in one section.

The entertainment format also plays a role. If performers or competitors join the audience at any point during a show or event, they’re counted in the capacity total. If not, they’re excluded.

Live entertainment or other events with attendance of more than 250 people will require specific approval from a state oversight agency, such as the Gaming Control Board, Athletic Commission or the Department of Business and Industry.

The new directive will also set a 1,000-person capacity limit on trade shows, conventions and conferences, given the increased chance of co-mingling with other attendees as compared to other events. Conventions may have up to 250 people without approval, but need to seek approval for an event of between 250 and 1,000 people.

The directive also loosens restrictions on a number of other activities or places, including playgrounds if the local health authority deems it appropriate. Real-estate agents can also resume in-person showings and open houses.

The directive will not make any changes to current restrictions mandating that grocery stores, restaurants, museums and other retail stores limit their capacity to 50 percent.

Sisolak said his office was preparing for additional press conferences in the near future related to youth and adult recreational sports. As for events that are more difficult to count, such as Halloween trick-or-treating, Sisolak said the state is working on guidance that will be released in the coming weeks.

The state’s COVID-19 Mitigation and Management Task Force voted earlier this month to reopen bars across the state after state officials shuttered them in July.

The governor also addressed a recent spate of violence on or around the Las Vegas Strip, saying he has had several discussions with the resort community and Sheriff Joe Lombardo. During the most recent incident on Sunday night, an outdoor shooting near the Flamingo casino left one person critically injured.

“I have the utmost confidence in Sheriff Lombardo and the men and women of Metro to be able to be out in front of this and get a handle on this,” he said. “It’s unfortunate when you get some out-of-towners that are coming in and causing a problem on our Strip and making it unsafe for our workers, for our residents, for tourists. But we’re going to work hard to get it back to normal and stop the violence on the Strip.”