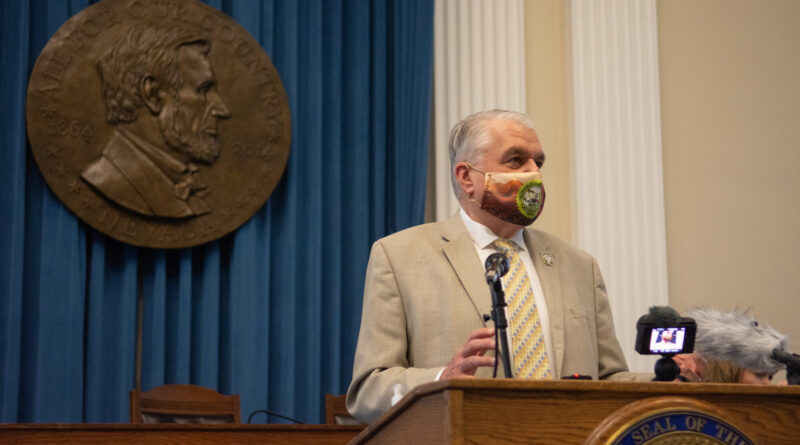 Months after ordering sweeping closures, Gov. Steve Sisolak on Monday unveiled what he said is a “natural evolution” in the state’s response to COVID-19 — a targeted approach that involves assessing county data each week and forming action plans that would go after the root cause.

Sisolak — who said Nevada is in a “precarious position” with the virus — first hinted at the new planning framework last week during a press conference, when he announced the state would begin moving away from reopening “phases” in favor of a more targeted approach to noncompliant businesses and hotspot regions.

“At the beginning of this pandemic response we took bold moves to flatten the curve by issuing broad-based stay at home orders and closures,” he said. “However, shutting down public and economic activity throughout the state is not sustainable in the long term. Hundreds of thousands of Nevadans lost their job. Businesses suffered and our fragile economy took a massive hit.”

On Monday evening, the governor described the data-driven plan as one that will drill down further geographically and balance health and economic considerations.

“For example, if the assessment determines that an increase of positives in the county are all stemming from a skilled nursing facility, then it wouldn’t make sense to close down indoor dining,” he said. “The plan should be focused on stopping spread at those nursing facilities where it is occurring.”

The approach hinges on data analysis run by the Department of Health and Human Services every Thursday that will look at cases, tests and test positivity rates to determine each county’s risk level. The COVID-19 Response Task Force, made up of representatives from several state agencies, the Nevada Hospital Association, the Nevada Association of Counties, the Nevada League of Cities and the Nevada State Public Health Lab, will review the analysis and inform county leaders of their status.

If counties don’t meet two or more criteria, they’ll enter into an assessment process with the task force and develop an action plan. The action plan could result in reducing the size of public gatherings or limiting capacity in certain high-risk settings, according to Caleb Cage, Nevada’s COVID-19 response director.

The mitigation requirements will not apply to school settings.

When a county is found to be at a higher level of risk, it will enter a “warning week” and be notified of the criteria used to determine its risk level. After that, there will be a consultation with the county to determine next steps.

If a county continues to stay in a higher risk band or increase its risk band, it could be subject to increasingly strict mitigation measures.

Additionally, the state will take into account “special consideration” circumstances, such as an outbreak regionally, within tribal nations, or in institutional settings, such as long-term care facilities, prisons and cases among families or households.

The state is also continuing to look at another set of six statewide metrics, including the supply of personal protective equipment, cases among vulnerable populations, enforcement of social distancing protocols, contact tracing, testing and hospitalizations. However, the state will only be assessing counties individually using the three testing and case criteria.

“The six metrics are really the items that we are watching on a day-to-day basis and have been watching since the beginning of the pandemic,” Cage said. “The three criteria are what we are assessing the counties by on a weekly basis to determine whether or not there is an elevated risk level there.”

Until the first assessment occurs and action plans are finalized, bars, pubs and taverns remain closed in Clark, Washoe, Nye and Elko counties, Sisolak said. The assessments will begin this week and continue the rest of the year.

And, in the shift away from a one-size-fits-all approach, counties will receive a list of businesses or locations that emerge from disease investigations. If the list includes “notable outliers” with infection spread that seems disproportionately high, a local strike team — consisting of city, county, state or regulatory entities with oversight over the business or location — will be dispatched to conduct a deeper investigation and form a separate mitigation plan.

“I want to be clear. In no way are we relaxing our mitigation efforts,” Sisolak said. “We’re taking a more strategic, aggressive approach that will target this disease.”

Sisolak said all options remain on the table, including dealing with any problem spots in the casino industry. If the data identifies casinos as a source of infection, the governor said the state would take “appropriate action,” but he said they’d examine whether the spread was occuring at pools, table games, restaurants or other common areas within the massive properties.

Still, Sisolak said the largest problem — and one that’s difficult to control — is family gatherings. He also rebuked people who go to work knowing they are sick or who have tested positive for COVID-19.

“It’s selfish. It’s something that has to stop,” he said. “If you’re sick, stay home. I mean, that’s pretty common sense, and a lot of people aren’t even doing that.”

Cage said it’s a “Nevada-specific plan” that uses best practices from around the country and world, including approaches taken in Colorado and Oregon.