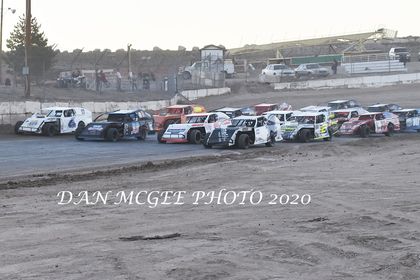 A Two-Day Show ended the 2020 season at the 95A Motor Sports Complex this weekend. The first day was Saturday evening while the second day began Sunday at noon and ended just as the sun was going down.

The honor of ending the racing year fell to the IMCA Modifieds and prior the start, they did a 4-wide salute to the fans. It was quite a race with a come-from-the-pack victory for a California driver.

When the green waved on the 20-car field, Shawn Natenstedt took off and left everyone in his dust. Behind him Matt Murphy and Cory Sample began to dispute second place.

After a caution slowed things down, racing resumed and once again Natenstedt took off. By now Sample was second and leading the pack chasing the leader.

Further down was California driver Ryan McDaniel, who came out of one of the two B mains and started 13th, was moving forward. Sample found himself under attack by Riley Simmons.

Another caution erased all of Natenstedt’s advantage, but on the restart he again took off. This time McDaniel was third and about to take the spot from Simmons, while Sample dropped back to third.

Now the chase was on, and soon McDaniel had Natenstedt in his sights. In the final laps McDaniel used an outside move to grab the lead, score the victory and bring down the curtain on the season.

After the race McDaniel said, “Riley (Simmons) showed me the top. I didn’t realize it was good up there, you don’t know and he went around me. ‘Oh that’s where the groove’s at.’

“But then he got stuck on the bottom and I just blazed it in there. It was like you were running on a tacky track, unreal. I’m wore out and nervous as she was in the chip the whole straightaway.”

Then he thanked God, Jason for working on the car all day, Weird Machine, Auto Max and Race Chassis.

There were so many modifieds it took four heat races and a pair of B Mains to set the final field. During the day it seemed as thought the flagman was going to wear out his arm as many mains had a bunch of cautions.

The Northern Sport Mod main had a dozen cars start and it was Jimmy Ray Huffmon’s time to shine. At the green he took off and at first was chased by Colton Chew.

Seven cautions would slow the field with a trio of them beng back-to-back. No matter to Huffmon, as he ruled the day and scored the victory.

Andrew Peckham was the runner up ahead of Craig Nieman and Mark Hain, who used a steady drive to take fourth a head of fifth placed Richard Longacre.

When the 18-car field of Hobby Stock took the green, it wasn’t long before Johnny Wood was on point chased by Rick Miller and Royce Goetz.

After the third caution of the six that slowed the pace, Goetz was on point with Wood, Randy Boyd and Dan Dias giving chase. When the fourth caution ended, Wood used an outside pass to take the lead back.

Two more cautions slowed things down, but in the end Wood won followed by Goetz, Boyd, Carl Barlow and Dias, who came back after a spin.

For Wood it was a long tow from Bakersfield, but he’ll go home a winner.

After the race he said, “It was fun, those guys are fast they’re good clean racers too. That’s probably the funnest races I’ve been a part of. We’re used to the cautions.”

For the Hobby Stocks it took three heats to set the field.

Also the Economy Sprint Cars that are winged were in the show. When the green waved, Trey Walters took off and it looked like a repeat of Saturday’s main.

However in racing nothing is certain until a driver passes the checkered flag.

Two cautions would slow the field and after the last one, Walters pulled off as the driveline in his car pulled off the rear housing, so he was out.

Up front, Nick Purdy was on point, but his front wing was kind of flapping since only the right side bolts were holding it to the car. Behind him, Bruce Ferrier was chasing Purdy, who reached the checkered flag first.

However, things changed in the post race tech. Purdy’s car was disqualified, handing the victory to Ferrier and boosting Adam Walters to second.

There was a pretty good field of Dwarf Cars on hand, and when the 14-car field was sent on its way, Daniel Weger was on point, but the race slowed with a caution.

Next on point was Glenn Sciarani, but he soon spun out of the lead. On the restart, Weiger was again on point, but by then the officials called for single file restarts.

When the green waved, it took less than a lap for Ben Wiesz to sweep into the lead. There would be two more cautions and the last one put Daniel Weger out of the race.

Starting the night were eight Pure Stocks, Gen-X at other tracks that started the main. First on point was Travis “Shorty” Showe.

During the race, two cars stalled bringing out cautions. Each time, Showe helped the tow truck crew by pushing the cars to pit in.

After being so helpful, Showe would then lead the restart and leave everyone in his dust. At the end of of the race, he had at least a half lap advantage over runner-up Andi Hast.

After the races Showe said, “It wasn’t as close as I was hoping but everyone ran a good race and had fun.”

Then he thanked his sponsor Jacobson Towing and Salvage Recovery.

Later when the racing was all finished, drivers assembled at the tech area to pick up their checks and any trophies. Now the oval will be dark, but next spring everyone’s hope is that the season can be normal again.

• Saturday evening is when the two-day show began. While Sunday’s action was run under a clear blue sky, on Saturday it was windy with clouds.

Like Sunday, it took four heat races and a pair of B mains to set the IMCA modified field of 20-cars. It took two attempts at starting the race but when the second green waved Shawn Natenstedt was off and running.

Back in the pack, Chris NIeman was working his way to the front and got a big help from a caution. Ahead of him Cory Sample and Ryan McDaniel had been disputing second place.

In the final laps, Nieman took the point and claimed the victory. Natenstedt ended up second ahead of Sample and fourth place McDaniel.

After the race Nieman said, “That yellow definitely helped out as we were a ways back. He (Natenstedt) was out there a ways.”

On this night, the IMCA Northern Sport Mods started the show. Three cautions slowed including one with three to go when a car lost its drive line.

In the end, Andrew Peckham won followed by Craig Nieman and Mark Hain, who ended up ahead of fourth place Richard Longacre.

Nine Economy Winged Sprint Cars took the green flag and Trey Walters was off. There would be three cautions that slowed the race, but the night belonged to Walters.

There were 15 Dwar Cars that took the green and Ben Wiesz was on point right after that. Over the course of the race four cautions would slow the pace.

In the end it was a Wiesz family one-two finish, with Ben winning and Josh in the runner up spot. Finishing third was Tim Fitzpatrick.

There was a small field of Pro Stocks on hand, although they are called Super Stocks in the results. Unfortunately two cars were unable to take the green. One was Antonio Aragon while the other was Jay Sears, who won the last time the Pro Stocks raced on the oval.

After the green, even though a brief caution slowed things down slightly, it was all Jeff Olschowka, and he had about a straight away lead at the end.

Ending the marathon show were the Hobby Stocks. When the green waved 19 of them tore off into Turn 1.

First on point was Don Deiter, but he was soon passed by Randy Boyd. Back in the pack, Tom Haxall pulled onto the infield and was out of the race.

On lap 4, there was a spin at the exit of Turn 4 that turned into a red flag when it appeared the car might have a small fire under the hood. Once that was cleared, racing resumed with Boyd on point and being chased by Carl Barlow.

Moving up was Johnny Wood and he was beng chases by Royce Goetz. There were be three more cautions, but in the end Boyd held off Wood to claim the victory. Goetz ended up third ahead of Barlow and fourth place Rick Miller.

Once the dust settled, everyone was heading for bed as it was after 1a.m.

REPORTER’S NOTE: The two-day show also wrapped up the 2020 I-80 Challenge. However this reporter has been unable to find the points so as soon as I can they will appear in a future article.

Need to compliment the track crew at 95A Motor Sports Complex. It was a very long two days but they did a great job and kept things rolling. Hopefully next year will be even better.

Now the oval tracks in Northern Nevada are dark but in the spring, God willing, they will all spring to life once again.