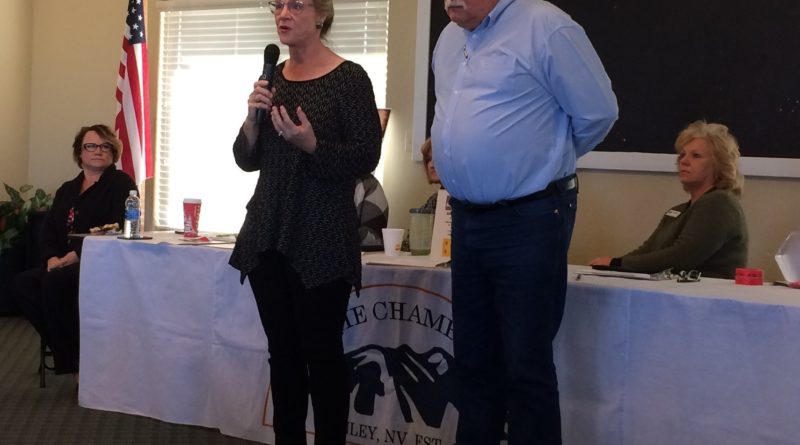 The company studying the feasibility of bringing a hospital to Fernley said Tuesday that its doors could be open within two years if everything goes as expected.

J.P. Smith of Generations Medical Concepts, LLC and Victoria Alexander Lane, an administrator brought on by the company, said Tuesday at the Fernley Chamber of Commerce Ambassadors breakfast at the Golf Club at Fernley, that a local board is being created, a feasibility study is being completed, and they are awaiting the approval of the study by the U.S. Department of Agriculture for funding.

“We expect that if everything goes the way it should, in two years we should start opening doors,” Lane said.

Smith and Lane escribed an ambitious project that would include a full service hospital with urgent care, mental health care and a long-term care facility.

It would be located north of Terrible’s Travel Center, just off Interstate 80 Exit 48.

“This will be the first community west of the Rockies to have full telemedicine with Massachusetts General Hospital,” Smith said. “You will have better access to healthcare here than anybody else in the state, including Las Vegas.”

Lane said the size of the facility would be determined by the feasibility study.

“We do not want to have a great edifice that is empty,” she said. “

Smith said the feasibility study was put on hold because of USDA requirements, which included the creation of an oversight board. He said the individuals for that board have been chosen and have held several meetings, although the board hasn’t been formally formed.

Smith and Lane said the facility would be a 501(c)3 non-profit organization, not a government hospital.

Smith declined to name the members of the board, but said they include representatives from Carson-Tahoe Hospital, Tesla and the University of Nevada, Reno.

“I’ve asked them all to stay out of the limelight,” he said. “In January we’ll have a proven concept, then will ask them to expose themselves.”

Smith said the feasibility study will be completed by March.

“It will be full go once we get the approval by USDA,” he said.

Smith said a preliminary study, which was based on a 200-mile radius, with a primary market of a 50-mile radius, showed that Fernley can support a hospital.

Lane said her role will be to work with the board.

“My role will be to help the board cohese, so we can run an effective healthcare system,” she said. “When we hire a CEO, the board will have oversight of the CEO.”

Lane said she began her career as a U.S. Navy corpsman, and has been a critical care nurse, nurse manager, nurse CEO and administrator in hospitals from Maine to California.

“When I look at what is going on here, I think this is a tremendous opportunity,” she said. “This is a great opportunity for you to have healthcare the way you want it.”

Former Fernley Mayor LeRoy Goodman said a facility of about 600 employees, as described by Smith and Lane, would require a budget of at least $50 million per year.

“I don’t see where operating money is coming from,” Goodman said.

Smith said the board would be sorting through all of the financial issues.

“Our company cash flow analysis will figure what the facility needs to operate in the black in the first year,” he said.