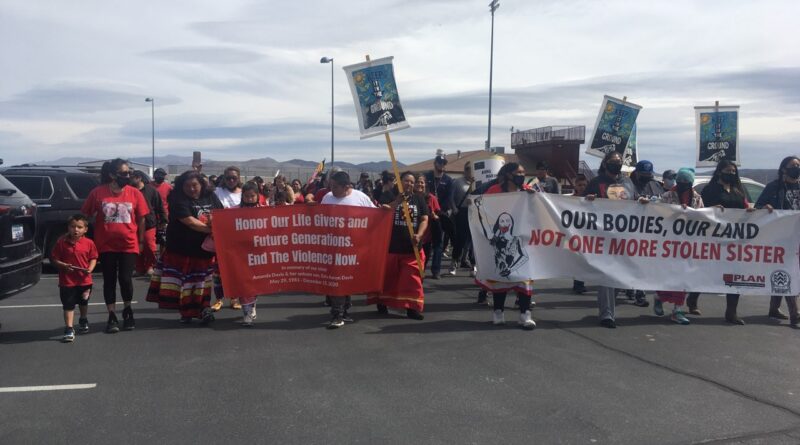 Like many other tribes across the country, the Pyramid Lake Paiute Tribe hosted a solidarity walk Thursday morning to mark the National Day of Awareness for Missing and Murdered Indigenous Women.

For many of those taking part in the walk in Nixon, the issue is all too personal.

A large crowd gathered to walk from Pyramid Lake High School to the intersection of State Routes 446 and 447, then back to the Pyramid Lake Museum. Many of them walked in demand for justice for the loss of three of their relatives in less than two years.

Compounding their pain is that justice for so many murdered and missing indigenous women is slow in coming, if it comes at all.

On Feb. 3, Anna Scott, a member of the Pyramid Lake Paiute Tribe, was found dead of a gunshot wound in the trunk of her burned car on Interstate 580 near the Galena Creek Bridge in Washoe County. On Dec. 15, Amanda Davis was stabbed to death in a domestic violence incident, and her unborn child, Ezra, also died.

A man, Michael Burciaga, is facing charges of second degree murder in the killings of Amanda and Ezra Davis, but so far, nobody has been charged with killing Anna Scott.

“We’re here asking for billboards, we’re asking for our communities to support Anna Scott with a Go Fund Me, and the federal government, the state government, the city governments are not assisting the way that they should,” said Beverly Harry, one of the speakers who addressed the crowd before the walk.

According to the Urban Indian Health Institute, homicide is the third-leading cause of death among Native American women, and Native women face rates of violence up to 10 times higher than the national average.

Many Native Americans believe those cases don’t receive the same kind of attention from law enforcement and the media as when white women go missing or are murdered.

“When walk here, we’re walking out to express the need for our trauma, our healing and to express to the federal government that we need more,” Harry said.

Tribal elder Reynelda James led the gathering in a prayer to open the ceremony. Following the walk, the film Justice for Our Sisters and Earth Mother was debuted at the museum.

“We’re asking for justice for our relatives. This is really a very powerful day,’ said Billie Jean Guerrero, director of the Pyramid Lake Paiute Tribe Museum. “It’s each and every day that we remember those who have gone missing, those who have been murdered.”