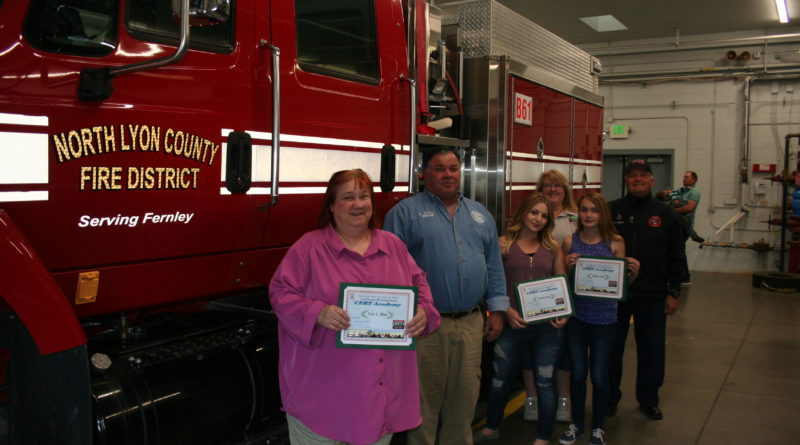 Jaiden Lea wants to be a doctor when she gets older, so when she heard about the North Lyon County Fire Protection District offering a CPR class, she and her mother, Derina, decided to attend.

From there, Jaiden, 11, has become what might be the youngest person in the state to graduate from a CERT academy.

Jaiden, Derina and Coy Bier were presented with their Certificates of Completion at the April 13 meeting of the NLCFPD Board of Directors meeting, for completing the academy in March. October 2016 CERT graduate J. Renee Green was also recognized at the meeting, although she wasn’t able to attend.

The Community Emergency Response Team (CERT) Program educates people about disaster preparedness for hazards that may impact their area and trains them in basic disaster response skills, such as fire safety, light search and rescue, team organization, and disaster medical operations.

The graduates of the academy are now eligible to join the district’s CERT team.

Jaiden is the youngest graduate North Lyon Fire has had since creating the CERT program, the only such program in Lyon County. A spokesperson from the Nevada Office of Department of Emergency Management was unable to verify whether she is the youngest CERT graduate in the state.

Jaiden said she and her mother initially registered to take the life-saving CPR course the fire district was offering, but decided to attend the CERT academy after learning more about it,

“I’ve always wanted to be a doctor when I got older, so my mom thought doing CPR would help,” Jaiden said. “I wanted to start out and get involved so when I’m older, I’ll have more experience.”

Using the training learned in the classroom and during exercises, CERT members can assist others in their neighborhood or workplace following an event when professional responders are not immediately available to help. CERT members are also encouraged to support emergency response agencies by taking a more active role in emergency preparedness projects in their community.

CERT academy graduates are not required to join the CERT team as volunteers, but Jaiden said she and her mother probably will.

“It was actually really fun, a lot more than I thought it would be,” Jaiden said. “My favorite part would probably be learning how to do CPR and work the defibrillator.”