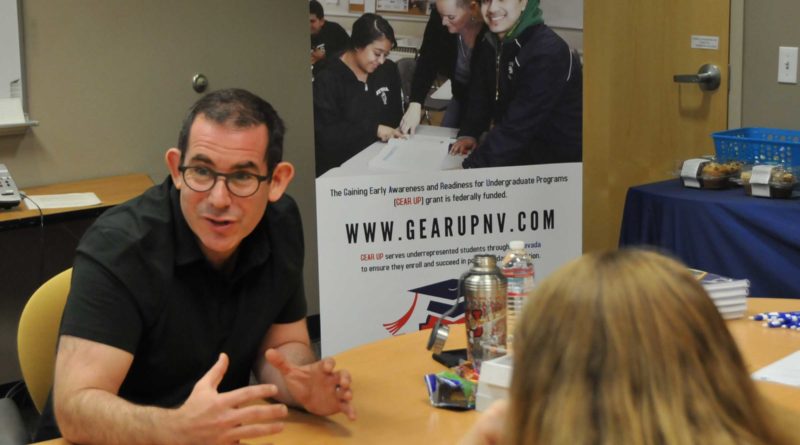 A select number of Western Nevada College students in Carson City had the privilege of meeting with a New York Times bestselling author on Thursday.

GEAR UP students who previously attended Yerington and Silver Stage high schools had the opportunity to listen to Harlan Cohen’s perspective and insight on going to college during a workshop titled “Dream It, Believe It, Make It Happen.”

Cohen, a graduate of Indiana University, has authored five books, including “The Naked Roommate’s First Year Survival Workbook” and “The Naked Roommate: And 107 Other Issues You Might Run into in College,” and serves as professional speaker, visiting about 80 colleges annually. He’s also a nationally syndicated advice columnist and creator of Best First Year (www.BestFirstYear.com).

Nevada State GEAR UP (Gaining Early Awareness and Readiness for Undergraduate Programs) is a federally funded grant that is designed to increase the number of low-income students who are prepared to enter and succeed in postsecondary education. School selection is based on a federally free or reduced lunch rate of 50 percent or higher.

Generally, students are identified as GEAR UP during their seventh-grade year and exposed to GEAR UP activities that continue through high school and their first year of college at a Nevada System of Higher Education institution. At its height, the Nevada State GEAR UP grant supported 21 high schools, a robotics program, a longitudinal study and the University of Nevada, Reno’s Dean’s Future Scholars program. This translated into approximately 5,500 students being included in Nevada State GEAR UP programming.