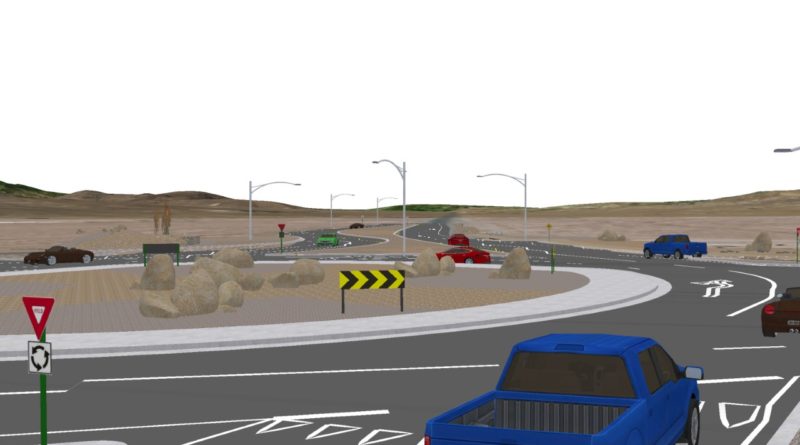 Traffic lane shifts and speed reductions will take place through early fall on U.S. 50 in Silver Springs as the Nevada Department of Transportation begins construction of a roundabout connecting the future USA Parkway extension to U.S. 50.

Beginning May 1 through early fall, drivers can anticipate traffic shifts and speed reductions on U.S. 50 near Opal Avenue in the Silver Springs area. U.S. 50 traffic lanes will initially be shifted south of the current roadway as the future traffic roundabout is constructed, and speed limits reduced to 25 mph. Traffic traveling between U.S. 50 and Opal and Bowers avenues will also be detoured to other nearby access points during construction.

When the roundabout is completed, it will help enhance traffic safety. U.S. 50 speed limits through the roundabout will permanently be lowered as low as 25 mph. Because traffic enters and exits through right turns only, severe crashes are less frequent in roundabouts than in many four-way intersections. Traffic roundabouts can also decrease travel delays, congestion, fuel consumption and air pollution, while still allowing room for large trucks to travel through.

The USA Parkway was originally constructed as a privately built, six-mile-long road connecting Interstate 80 to the Tahoe Reno Industrial Center east of Sparks. The project will extend the Parkway by more than 12 miles to reach U.S. 50 at Silver Springs, creating an approximately 18-mile-long, four-lane state roadway between Interstate 80 and U.S. 50. Known as State Route 439, the new roadway will further link the greater Reno/Sparks area with the U.S. 50 corridor, enhancing regional mobility and creating an additional route for commuter, freight and other traffic. The road will also help support regional economic development and serve as another route in the event of emergency or weather-related road closures. The project is projected to reduce travel times by as much as 38% for those traveling between U.S. 50 and I-80.

More than four miles of future roadway has also been paved. The $75.9 million project by design-build contractor Ames Construction is scheduled to complete in late 2017, opening the new USA Parkway extension to traffic. Project information is available at www.usaparkway.com or by dialing (775) 888-7000.