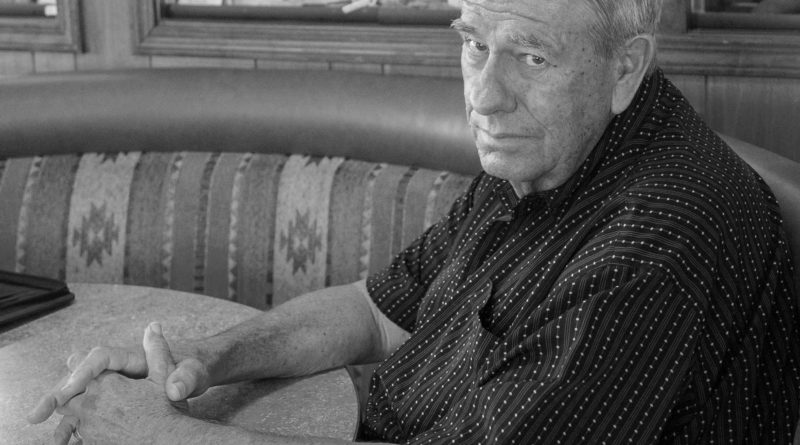 LeRoy Goodman is a walking, talking Fernley history book. Most “People You Should Know” interviews last about 30 minutes. This interview was still going strong at almost 2 hours.

Goodman’s ties to northern Nevada go back more than 100 years.

“I had an aunt, not my aunt, my wife’s aunt, who lived in Reno, Katarina Ferrari. She came over from the old country when she was 6 months old. She remembers coming over from the ranch in Sparks to see some friends from the old country in Fallon. They had a 1910 Oldsmobile, it would take them all day to go from Sparks to Fallon because of flat tires and such. This was 1915-1919. They would spend the night and all the next day with their friends and then come home the next day. I had another Aunt, she was born in Virginia City in 1904. She watched the International Hotel burn down in 1914. She was 96 when she died. She used to tell me about the old days and then she would hit the switch on the lights, used a remote to turn on the TV and say, ‘Let me tell you about the good old days – the good old days are right now!’ and she was right.”

“Fernley was a big school, had 65 kids in the high school We had like 38. We were rivals, but after the games the moms would fix sandwiches and stuff for the teams. Fernley had a little lunch room, we didn’t have one. We used our study hall. We would get together about a half hour after the game and have a sandwich, coke and stuff and we’d talk with each other and got to know each other. Later on, we remembered each other. If I was stranded in Battle Mountain I could get hold of one of these guys and get help. We’d also play 6-man football or 8-man football. In 6-man football everyone except the center was eligible to catch the pass.”

Playing sports in a small, rural northern Nevada town was a challenge.

“We’d play Gabbs. It was a mining town about 150 miles from Fernley. It was our longest road trip. When Gabbs came to Fernley, it was their closest road trip.”

After getting his BA and MA in teaching from the University of Nevada and serving in the Air Force and National Guard, Goodman began teaching history at Fernley High School around 1965.

“The population of Fernley in 1965 was about 800. We didn’t have a bank, accountant, no dentist, no doctor. We had an insurance agency and a small grocery store. Had about 105 kids in high school that included Nixon, Wadsworth, Silver Springs and Fernley. I was a basketball coach for about 8 years.”

The origin of Fernley’s name is shrouded in mystery. Goodman spoke about several different possibilities including my favorite – A laundry lady worked at the depot. Her name was Fern Lee. When anyone asked where they could get their clothes washed, they were told to ‘Go to Fern Lee.’ When asked why we don’t know more about how Fernley got its name, Goodman adds, “ Fernley started 1904-05 when the railroad roundhouse moved from Wadsworth. The records were destroyed in the San Francisco earthquake/fire 1906.”

Even as a teacher Goodman was on the Fernley Advisory Board.

“We’d meet once a month. Someone said we need a street light so one of us would go down to the County Commissioner’s office and it’d get done.”

Over the years, Goodman helped the citizens of Fernley in many ways including serving on the State Opportunity of Nevada Board, State Economic Board, Fernley Town Board (2 terms), County Commissioner and eventually as Mayor of the city.

When asked about the C-Tax, you could almost see flames erupting from Goodman’s ears.

“It’s a crime. It’s a shame. It’s like beating your head against a wall. Everyone, even the judge says, ‘It’s a catch 22. It isn’t right, but there is nothing we can do about it.’ We talked to the Governor and Governor Sandoval said, ‘It looks like litigation.’ Well, that’s what we did but the Supreme Court turned us down.”

“When I first became Mayor, we went down to taxation to talk to them. We thought it was an easy fix.

We kept getting the run around. Then I looked at some of the reports and they still had Fernley as an unincorporated town according to taxation. They did not change it to an incorporated city until 2011, ten years after we incorporated as a city.”

“A lady named Eunice Marcum, nice lady, whose son was killed in Vietnam. She started pushing on Joe Dini to get a veteran’s cemetery established in Nevada. At that time there were no veterans cemeteries in Nevada at all. So she pushed on Joe and the County Commissioners who eventually donated the land. Joe Dini got it pushed through the legislature. It’s a big plus for the community.”

When asked where Fernley will be in 5 years, Goodman says, “If things keep going the way they are now, I think Fernley will be about two to three thousand more people, probably about 10 percent more growth. Several additional stores. We don’t need another casino, bar or restaurant right now. Steve’s Ice Cream is a great example of a great business. We have friends from out of town that always stop at Steve’s. Steve talks to you. He makes his own ice cream. He has a reputation. He’s open seven days a week.”

Another business Goodman loves is the Wigwam. “When he (Moe Royels) first opened, it was a Dainty Cone, like a Dairy Queen. Moe finally put a second piece on so you could come in and sit down. We suggested he should also serve dinner so finally on Wednesday nights he had all you could eat spaghetti dinner. The next Wednesday he would have all you could eat pork ribs. Even when I-80 opened up and took all the traffic off Main Street, he hung on and did well.”

What about Burning Man? “I think it’s great. It puts money into the community. One time, several years ago, some of the Burners stopped here (Wigwam) to have breakfast or lunch. One time a SUV with a trailer in the back stopped. About six guys got out of the trailer and they were caked with dirt. They shook themselves off pretty good. We were thinking, ‘You guys aren’t coming in here are you?’ And you’re thinking, ‘Why would you do that…go out there for seven or eight days. I’ve been out to that desert!’ One time we ran into a group at a gas station and they asked. ‘We’ve never been out there. What’s it like?’ I said, It’s a little dusty and dirty.’”

Goodman usually attends the Chamber of Commerce Ambassadors meeting on Tuesday mornings. He is always asked to give a history quiz to the attendees, who can then win a prize if they provide a correct answer. His quiz for this article is, “This is the 77th year for the state to celebrate Nevada Day. Nevada was admitted to the Union on October 31, 1864 so I guess the quiz is, ‘What state was admitted just before Nevada and what state was admitted just after Nevada?’” Without Googling the answer, do you know?

Finally, what does Goodman think the city should do over the next five years?

“I have a couple of things. A couple roads need improving. Miller Lane desperately needs improving. The other thing is a convention center. Other than City Hall, Fernley does not have a place where you can put 300 or 400 people. We need it. A small convention center. It would draw people here. People like the Nevada Association of Counties, The League of Cities, the VFW. They’d love to come to Fernley. I think if we had a convention center, you’d see another hotel or two.”

“Fernley has a good future as far as I’m concerned.”