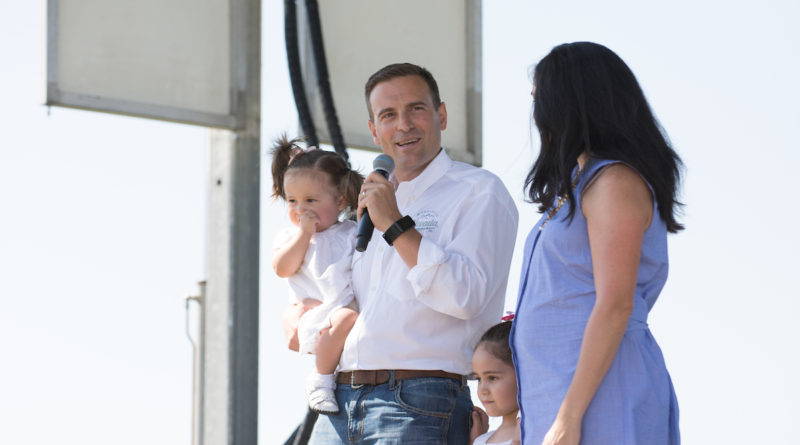 Last weekend, the team behind Attorney General Adam Laxalt’s long-expected gubernatorial bid had all the pieces in place for a campaign rollout — a new website and campaign logo, a highly produced 3-minute biographical video and a planned week-long, 17-county tour.

But that political calculus changed late Sunday amid the shooting massacre on the Las Vegas strip that left 58 people dead and nearly 500 wounded. Laxalt’s campaign announced shortly after 2 a.m. Monday that it would be “indefinitely” suspending any political announcements.

Laxalt has kept that promise throughout the week, tasking his office to assist Las Vegas police and the FBI in processing the shooting’s mass crime scene, giving updates along with other police officials and using his office to warn of “scam charities” popping in the wake of the shooting.

His website now contains a link to a GoFundMe raising money for victims and a brief statement on the shooting.

“The sickening actions of a madman have changed our city, our state, and our country forever,” the statement reads. “But we are stronger than the evil he embodied. We need to come together now as Nevadans and continue to keep the victims and their families in our prayers and express gratitude for our police officers and first responders.”

But for a few hours late Sunday and early Monday, the conservative 39-year-old attorney general and grandson of a legendary U.S. senator and Nevada governor made official what many in state political circles have expected in officially announcing for the office held by termed-out Gov. Brian Sandoval — and said he’ll try to repeal one of his fellow Republican’s signature achievements implementing a tax on large businesses.

“His determination to make Nevada a better place has never been stronger,” a three-minute video on the website said, which was still live as of Sunday. “That’s why Adam Laxalt is running for governor — to provide the strong, independent leadership we need.”

Although the Issues page on the site has been removed, it revealed some of his closely held policy priorities, including:

The Issues page also noted Laxalt’s strong support for gun rights and the 2nd Amendment, a record sure to come under renewed scrutiny after last week’s mass shooting.

His office issued a letter in December 2016 calling a recently approved ballot question requiring background checks on private gun sales or transfers “unenforceable.” He also signed the state onto an amicus curiae brief signed by 21 other state attorneys general asking the Supreme Court to take up a federal case upholding Maryland’s ban on large-capacity magazines and “military-style assault rifles.”

Laxalt will enter the race as a favorite against fellow Republican and state treasurer Dan Schwartz, helped by his prodigious fundraising — he raked in more than $1 million throughout 2016 and has spent part of the last 10 months engaged in a string of high-profile fundraisers.

If he defeats Schwartz, Laxalt will likely face off against either Clark County Commission Chairman and Democratic candidate Steve Sisolak, or, potentially, his fellow Democratic commissioner and likely gubernatorial candidate Chris Giunchigliani.

Giunchigliani was also set to make her gubernatorial aspiration official on Monday, but also cancelled a planned rally and announcement shortly after the shooting. She told Hispanics In Politics earlier this week that she would postpone her official announcement until Oct. 18 but was fully committed to running for governor.

Editor’s Note: We originally planned to publish a story on the announcement either late Sunday, Oct. 1, or early Monday, Oct. 2, after Laxalt’s website had been updated with news of the announcement. After the tragedy unfolded and Laxalt delayed his announcement, we decided to hold off on publishing it. Because of the newsworthiness of the content, we are publishing what we found. As always, The Nevada Independent welcomes your comments.