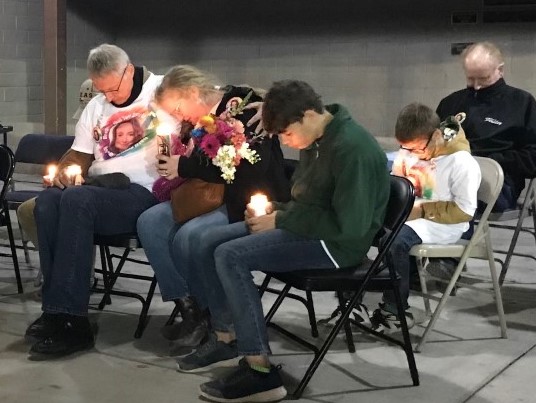 Herve Irion remembers the day in 2003 in a hospital in Houston, when a doctor told him to be prepared, because the daughter his wife was about to deliver would not survive.

Survive she did, but now, 18 years after the girl that Irion and his family call their ‘miracle baby’ was born, they are in need of another miracle.

Ten days after Naomi Irion was abducted March 12 from the Walmart parking lot in Fernley, her family and a crowd of about 300 people prayed for her safe return at a candlelight vigil at the Out of Town Park Tuesday night.

“Keep praying for Naomi, keep praying that God opens the door for her so she can escape, and to give her the strength to do so,” Herve Irion said. “And also, it’s not just Naomi, there’s many, many people, children, men, women, who are abducted, kidnapped and we never know where they are. Please keep praying for her, and for all the ones like her.”

Irion detailed how his wife, Diana, was bedridden for weeks during her pregnancy with Naomi, and lost the amniotic fluid about 20 weeks before Naomi was due. Irion said doctors told him her lungs and kidneys would not be developed enough for her to survive. Yet somehow, shortly after delivery, she began to scream. Not much later, she peed.

“All babies are miracles, but some babies are more special because they were just sick and not supposed to survive,” Irion said. “So Naomi is our miracle baby, and we hope a miracle is not taken away from us now.”

Naomi Irion’s brother, Casey Valley recalled being 14 years old at his mother’s side during the weeks she was bedridden.

“That’s the reason I know miracles do happen, and we need one right now,” he said. “We need Naomi to come home.”

Diana Irion struggled to hold back tears as she talked about what her daughter must be going through.

“I worked so hard to save Naomi’s life when I was carrying her, and now I need to work so hard to save her again,” she said. “But I can’t do it alone. I need you. My family needs you. My little boys need you. Thank you for being there for us.”

One after another, family members thanked the Fernley community for its outpouring of love and support, and donations of money, food, housing and even ribbons that were handed out to those arriving for the vigil.

“This is the most horrific thing that can happen to a family,” Diana Irion said. “Imagine your daughter, your sister, your momma, an auntie, imagine if she disappeared on her way to work one day. That’s how we feel. Naomi is your siter too. She’s your daughter. She’s your friend, your coworker. When we find her, and she finds out the love of the people, it’s going to help to heal her.

Naomi Irion came to Fernley to live with Valley last August, after her graduation from high school in an embassy school in South Africa. Valley said he feels responsible.

“I’m her brother, so I’m supposed to protect her,” he said. “So everyone can say that I’m not, but I know that I am, and every big brother out there knows how I feel right now.”

Valley, said another community search will be held this Saturday, and a location will be announced in the next day or two.