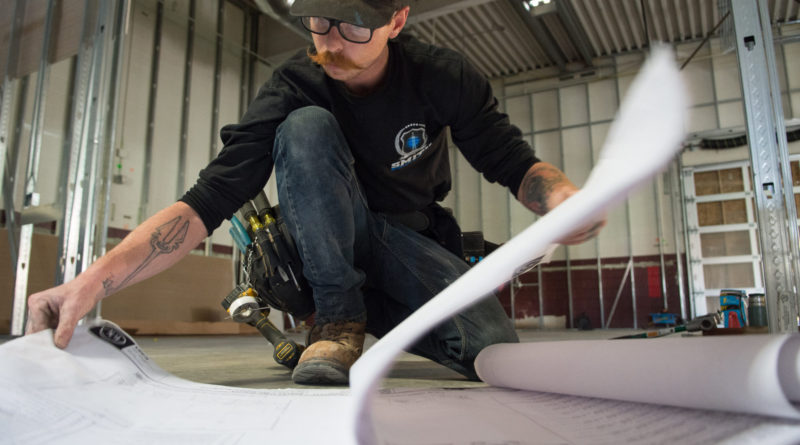 Melissa Caron’s career has brought her inside a state prison, a demilitarization area and a hospital operating room where a doctor was performing a surgery.

The behind-the-scenes access to places normally shielded from public view helped lure the 32-year-old to the trades: She began as an electrical apprentice and, after four years of training, became a journeyman electrician. Several years later, she purchased her parents’ business, A.M. Smith Electric, Inc., and now oversees a dozen employees.

“I’m not suited for a desk job,” Caron, whose business is based in Carson City, said. “I think it’s so boring being in the same place every day.”

She doesn’t dismiss the difficult aspects of the job. Electricians can log long hours in cold, rainy and sweltering conditions, but her company provides a starting salary of $48,000 that can balloon into six figures based on experience and responsibility level.

Still, Caron has been hard-pressed to fill positions — three journeymen and two apprentices — that she’s had open for a year and a half. She chalks it up to lack of awareness about construction-oriented jobs, especially among young people who have grown up thinking a four-year college degree is the only pathway to success.

“It needs to get out there that it’s an actual career,” she said. “It’s not for losers.”

It’s a sentiment shared by others in the construction industry who feel hamstrung by a robust economy and too few workers to fill the demand.

Two figures strike unease in Aaron West, CEO of the Nevada Builders Alliance, as he contemplates the fate of the state’s construction industry.

The imbalance at the opposite ends of the age spectrum spells trouble for a state that has roughly 10,000 construction openings and more expected over the coming years, thanks to job and population growth that’s spurring building projects, he said.

Build Your Future — an initiative by the National Center for Construction Education & Research meant to bolster recruitment — estimates that Nevada will need some 90,000 new construction workers over the next three years. The need encompasses everything from carpenters and electricians to pipefitters and heavy-equipment operators, all of whom fall under the umbrella of the construction workforce.

“I think too many people just think it’s swinging a hammer,” West said, referring to construction jobs. “We need everybody in all aspects. So that’s everything from designers, architects, civil engineers, material testers — through the dirt work side of it, through the vertical work side of it.”

The Nevada Construction Collaborative aims to fill those gaps. It’s a group of construction organizations that have banded together to bolster the industry in Nevada.

The group created a sleek website called BuildNV.org that essentially serves as a promotional flier for the industry. It details the various jobs, including what each pays on average, touts the lifestyle benefits of Nevada and offers a portal for submitting a resume.

The message in bold letters on the website’s home page: “Your future awaits.”

West hopes the information-heavy website corrects what he calls a “perception problem” with the industry. The recession eviscerated the state’s construction workforce, wiping out thousands of jobs and forcing those workers to find employment elsewhere. Many left Nevada. Others changed careers. And the industry earned a reputation as an unstable field.

Construction employment peaked in June 2006 with 146,400 jobs statewide, according to the U.S. Bureau of Labor Statistics. It bottomed out nearly six years later when, in March 2012, only 50,100 construction jobs existed across Nevada.

On top of that, industry leaders say they’re combating a societal notion that a four-year college degree is the best post-high school route.

“How many kids today talk about going into the trades when they’re in high school? None of them,” said Dennis Smith, owner of Home Builders Research in Las Vegas. “They’re trying to get a $200,000 techie job that doesn’t involve any physical labor.”

But securing a four-year college degree isn’t the norm for many students. Nevada’s four-year institutions have a 47 percent graduation rate, meaning less than half of their students complete a bachelor’s degree within six years, according to data from the Nevada System of Higher Education.

Plus, roughly 70 percent of Nevada jobs don’t require a full four-year degree, said Manny Lamarre, executive director of the Governor’s Office of Workforce Innovation (OWINN). Many of the new and expanding jobs in Nevada fall into the “middle skill” category — like construction-related jobs, for instance — that require some credentials or advanced education but not necessarily a four-year degree.

“I’m always, quite frankly, concerned about the nuance that students have about what an industry means and what it takes to be successful in that industry,” Lamarre said.

Expanding the state’s construction workforce may come down to messaging.

Felicia Ortiz, a State Board of Education member, thinks industry leaders, state officials and educators need to boost awareness about in-demand fields such as construction. Students won’t consider careers they know little about or, in some cases, don’t know exist, she said.

“I think first and foremost, expose kids to more,” she said. “Give them the opportunity to be exposed to all the various careers that are available.”

Efforts are underway to make that happen. Lamarre said his office is partnering with employers and schools to create pre-apprenticeship programs for a variety of fields, including construction, information technology, health care and advanced manufacturing. The programs would give students on-the-job and classroom training, leading to a credential affirming their knowledge and skills.

An even simpler strategy: distributing fliers filled with photos and information about needed jobs that may entice high schoolers to give the field serious consideration. OWINN is making sure photos include women and minorities to help shed stereotypes that can sometimes prevent people from pursuing certain careers, Lamarre said.

“It’s not about forcing one way or another,” he said. “I want people to make an informed decision and, right now, our young adults don’t have all the information.”

Of the Clark County School District’s seven career and technical academies, three have construction technology programs. Each of those schools — East Career and Technical Academy, Northwest Career and Technical Academy and Southeast Tech — has anywhere from 30 to 60 seats available for the construction program, but the demand is four to five times greater, said Gia Moore, the director of the district’s magnet schools and career and technical academies.

The district doesn’t have any plans to expand the construction technology program, but Moore said she’s “open to the idea” based on community feedback.  Expansion, however, requires adequate facility space for the equipment the program entails. In other words, it’s far from  a traditional classroom with desks. The program exposes students to the construction field and grants them various certifications upon graduation, including for welding and operating a forklift.

Martin-Harris Construction Company, based in Las Vegas, also has partnered with the school district the last few years and helped educate students about the industry’s opportunities and needs, Moore said.

While the career and technical academies help address some industry needs, Moore said a more robust pipeline of formalized apprenticeships and internships for high school students likely would boost participation in high-need sectors.

“If we don’t grab these students before they graduate, once they walk across that stage, we’ve lost them,” she said.

Caron’s electrical company recently took a three-month hiatus from bidding work because it simply couldn’t keep up with demand. The frequent calls for service, she said, underscore the need for more laborers across the construction spectrum.

Even so, the recession’s bruising effect on the industry isn’t lost on her, even though she disagrees with the mindset it has produced.

“Now we’re left with parents telling their kids or the younger generations that there’s no work in construction because it’s not recession proof,” said Caron, who also serves as president of the Nevada Builders Alliance. “If you are good at your job and you are successful, you will always have a job in construction.”

Hate the thought of sitting behind a desk all day? Eager to experience hands-on learning? If those questions end in a yes, Caron urges soon-to-be high school graduates or other young adults to consider the construction industry as a profession.

“If you like working with your hands and activity and constantly learning, it’s for you,” she said.

One thought on “Help wanted: Construction leaders say they need more workers to keep up with project demands”