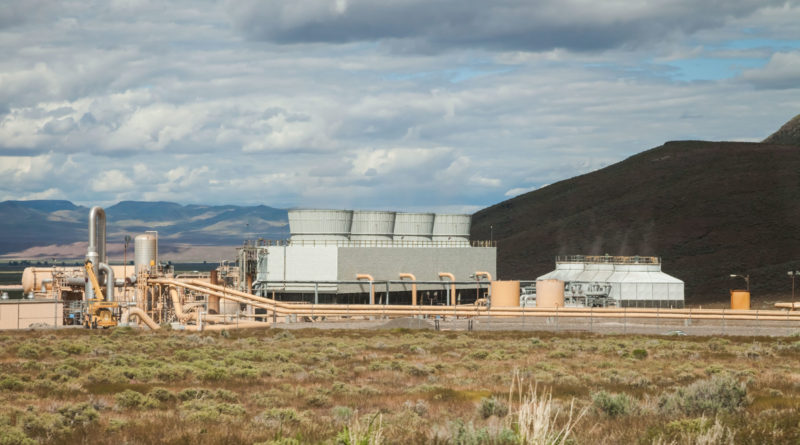 In the past two years, the conversation about renewable energy in Nevada has focused on fights over rooftop solar and the announcement of large-scale solar projects. Politicians and advocates all said the goal was to turn Nevada into the “Saudi Arabia of solar.” As Western energy markets pivot from fossil fuels, state officials want to broaden that goal. They see Nevada as not only the “Saudi Arabia for solar” but also the “Saudi Arabia of geothermal.”

And if they see Nevada as the Saudi Arabia of geothermal, they see Fallon as its capital.

State officials pledged $1 million this week to a years-long effort to land a national geothermal laboratory near Fallon. The Fallon site is one of two locations competing to serve as the main hub for the Department of Energy’s geothermal research. The other possible site is in Utah.

The federal agency is expected to pick a site next year. Researchers have been developing the Fallon project since November 2014, when a proposal was first submitted to the Department of Energy. In late 2016, it was selected as one of two possible sites for the FORGE lab. Since then, a team of researchers from organizations and national labs, has been conducting environmental reviews, drilling test holes and working on getting federal land permits.

The $1 million grant comes from the state’s Renewable Energy Account, according to Angie Dykema, director of the governor’s office of energy. That account was funded through a portion of property taxes on renewable projects that located in the state between 2010 and 2013.

“It’s an enormous gift to this project,” said Doug Blankenship, a researcher at Sandia National Laboratories, the lead organization for the Fallon project. “[New geothermal technology] is a golden ring that deserves to be looked at and Nevada is the best place to be doing that.”

Few Nevadans have likely heard of geothermal, a renewable energy resource that uses heat trapped beneath the Earth to power turbines. The geothermal industry is the first to admit that it lags behind other renewables like solar. With the steady drop in solar prices over the last few years, utilities have often passed over geothermal. They see solar as the least-costly renewable.

The industry is ready to see that change, and the Fallon lab could play a big role in that.

If selected, the Fallon field laboratory would be known as the Frontier Observatory for Research in Geothermal Engineering, or FORGE. The Department of Energy would use the Fallon FORGE lab to research and develop a concept known as “enhanced” geothermal drilling.

At conventional geothermal plants, operators drill wells to tap underground steam or hot water. The resource then travels through the well and is used to spin a turbine, which runs a generator.

A successful geothermal plant requires three things: heat, water, and water pathways. Those three factors are difficult to find together, and because geothermal (like oil and gas) is a blind resource, exploration can be expensive. Some companies might drill only to find that there is heat but poor geologic permeability. The goal of enhanced geothermal is to fix that problem.

In an attempt to induce water pathways, enhanced geothermal uses injected water to fracture rock. It is similar to hydraulic fracturing, but it does not rely on sand or the added chemicals.

“The overall goal of FORGE is to develop the technology that we need to make enhanced geothermal systems commercially viable,” said Bridget Ayling, who directs UNR’s Great Basin Center for Renewable Energy. “We know we have hot rock. We have hot rock everywhere.”

Last year, geothermal accounted for only 0.4 percent of all electricity produced by U.S. power plants, according to the Energy Information Administration. Researchers, industry experts, even utility executives see the potential to deploy far more geothermal. A 2006 technical analysis from MIT predicted that geothermal could account for 10 percent of the U.S. energy stock.

From a geological perspective, the potential is even greater.

Fallon FORGE says on its website that enhanced geothermal could open up a massive 100 gigawatts, enough energy for 100 million homes. Nevada has the country’s second-largest share of untapped geothermal resources, according to a 2008 report from the U.S. Geological Survey. The most conservative estimate in the USGS report suggests Nevada has about 500 megawatts of known geothermal potential, enough for 375,000 homes. It is likely much greater.

Reno-based Ormat Technologies is one of the largest geothermal operators, with projects across the West and in Nevada. The state ranks second in installed geothermal capacity.

Ormat is on the team readying the Fallon lab for site selection.

“Nevada is an international leader in geothermal production and technology but in order to remain the best in the world, we must continue to innovate and invest in research and development,” Gov. Brian Sandoval said in the press release announcing the $1 million grant. “These funds demonstrate the state’s commitment to renewable energy and our dedication to remaining the top research destination and producer of geothermal technology and techniques.”

Researchers at the Fallon site plan to use the funds to analyze subsurface rock.  Ayling said the core samples will provide them with important data. She expects that they will offer a better understanding of the area’s geology, such as the strength and mineral composition of the rock.

Out of research and development like the FORGE project, the geothermal industry is hoping for a technological breakthrough in enhanced drilling, something that helps geothermal compete.

Geothermal runs all day and night, whereas solar is intermittent; solar panels only produce electricity when the sun is shining. As more coal plants (and some natural gas plants) are pushed out of the markets, a geothermal power plant could be a more reliable replacement option than intermittent solar or wind. It’s a renewable that can be dispatched any time.

For utilities that buy geothermal, this could change the economic equation.

“As you go to higher penetrations of renewable energy displacing thermal plants, geothermal has a significant value. And that is you can dispatch it,” NV Energy CEO Paul Caudill said in a recent interview with The Nevada Independent. “We can use geothermal plants at night when we can’t use a solar facility. I think there is a significant value there. And as you start pushing to increase [solar] penetration on the grid, geothermal is going to become more valued.”