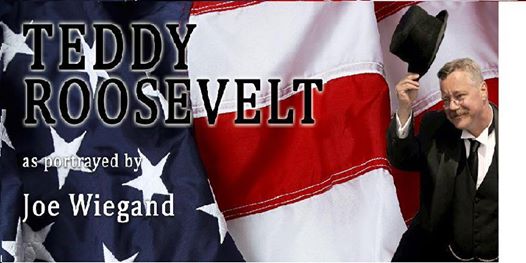 The Friends of the Historic Truckee Canal will be hosting “An Evening with Teddy Roosevelt”, as portrayed by Joe Wiegand.

The show is scheduled Friday, April 14 at 7 p.m. at Fernley High School.

Tickets are $10 each, $5 for students, and children under 5 are free. Tickets are available at Manpower, Nevada State Bank, Carpet King, Big R and Steve’s Homemade Ice Cream.

Roosevelt’s Reclamation Act of 1902 created the Truckee Canal as part of the Newlands Project, providing the water essential to the establishment of Fernley. Derby Dam was dedicated two years to the day after Roosevelt signed the Reclamation Act,

Wiegand is considered the world’s premier Theodore Roosevelt reprisor. He began performing as Roosevelt in 2004. In 2008, he traveled across America in celebration of Roosevelt’s 150th birthday and the final centennial year of his historic presidency. The tour was highlighted by performances at the White House and Roosevelt’s birthplace of New York City.

Wiegand has been featured as President Roosevelt in “The Men Who Built America” on the History Channel, served as the model for the newest Teddy Roosevelt structure at the American Museum of Natural History in New York City and has a feature role in “National Parks Adventure”.