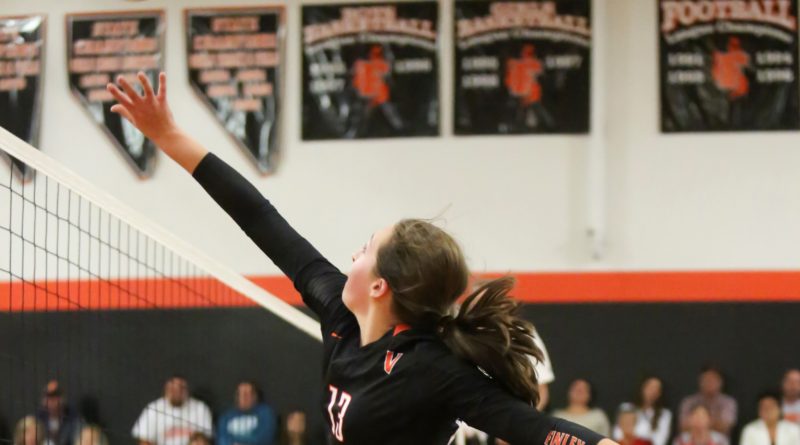 The Fernley High School volleyball team kept alive its hopes for one of the top two seeds for the Northern 2A Regional with a four-set win over Fallon Monday Night.

The Greenwave, meanwhile, took a step forward in their development that coach Patty Daum hopes will manifest itself in more wins next season.

For Fernley, the win moved them to 12-3, atop the Northern 3A, with Lowry and Truckee right on their heels at 11-3. Truckee plays Lowry on Wednesday, so one of those teams will suffer their fourth league loss, giving Fernley an opportunity to claim one of the top two seeds by winning their final match of the season at South Tahoe Thursday.

The top two teams get a bye in the first round of the regional tournament, which will be played in Fallon Nov. 3-4.

“We’re looking to be one of the top two so we can get a bye,” Fernley coach Dave Trujillo said. “There’s nothing guaranteed and we’ve got to fight for every point, so I hope we do well.”

While Fallon won’t be one of the six teams qualifying for the tournament, the Greenwave has made a habit of playing teams tough all season, but has been unable to break through and win against the league’s upper echelon.

It was winning the second set Monday night that had coach Patty Daum and the Greenwave excited.

“It’s been there all year’s long, we’re right in the middle of things and we can’t close it,” Fallon coach Patty Daum said. “This is the first time we closed it. I know that we maybe didn’t win the game, but for me, they learned how to close it.”

Fernley controlled matters in the first set, jumping out to leads of 5-1 and 11-2. Fallon scored four straight to get back within 11-6, but Fernley’s Katelyn Garnett ended the run with a kill, then she had four more kills as Fernley put the first set away.

Fallon got off to a strong start in the second set, and led 7-1 after Macie Anderson softly tipped a kill into a hole in the Fernley defense. Fernley went on a 16-5 run, and led 19-12. Fallon then scored the next six straight, pulling within 19-18 on consecutive kills by Anderson and a Fernley error.

Fallon finally tied the set at 22, then after Fernley scored two straight, Fallon fought off two set points to tie the set again at 25, then another to tie it at 25, before consecutive kills by Rylee Buckmaster and Anderson to win the set.

“That’s big, for them to understand they can play,” Daum said.

Fernley started the third set with renewed vigor, opening up a 13-2 lead. After a kill by Anderson, Fernley scored five straight and led 18-3, and with the score at 20-7, scored five straight to finish the set, with two kills by Raye Arroyo and a kill and a block by Natalie Stewart.

Fallon hung tough in the fourth set, and trailed just 12-9, when a diving dig by Shelbi Schultz landed in the middle of the Fernley defense for a point. But Fernley scored four in a row, on a kill by Garnett, an ace by Brittney Gaitan and two errors by Fallon. The teams traded points until Fernley scored the last six in a row, with Arroyo putting the exclamation point with two kills for the final to points.

“I thought we came out with passion and intensity in game one, it’s Senior Night, and then it seemed like we had a bit of a lull,” Trujillo said. “But the girls responded in game three and game four.”

Ultimately, Daum said it was her team’s inability to stop Fernley’s hitters that was the difference.

“We kind of stepped in and took some things away from them that they’re used to doing, but toward the end we just couldn’t stop their outside hitter, especially when my setter rotates to that front row, she’s five foot nothing, and they just swing over,” Daum said. “We tried to switch blocking, but it just wasn’t effective enough.”

Arroyo had 20 kills for Fernley and Garnett had 19, and Trujillo said it was his defense’s ability to get the ball to setters Mallori Campbell and Stewart that gave the hitters opportunities to attack.

“When we pass the ball well we can hit the ball well, and you could see that some of our hitters were hitting the ball well most of the game,” Trujillo said. “So I was pretty proud of them and we just need to keep up the intensity.”

The game between the two rivals drew one of the largest crowds Fernley has had this season.

“They’re one of our rivals, and so the girls are pretty excited about it,” Trujillo said. “The community has some stake at this and so I’m grateful that we’re able to bring a win home to the Fernley area.”