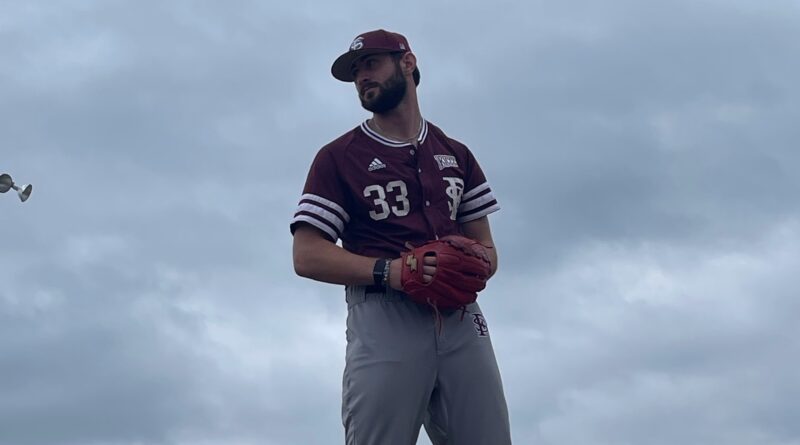 Fernley High School graduate Drew Miller has signed a letter-of-intent to play baseball at the University of Louisiana-Monroe.

A left-handed pitcher, Miller is preparing to play his first season this spring at Fort Scott Community College in Fort Scott, Kansas, after a medical redshirt season last spring.

“I had some injuries among other things and it didn’t work out then, but it definitely worked out now,” Miller said.

Miller graduated from Fernley High School in 2020, where he played basketball for four years, baseball for two and football for one. Instead of playing high school baseball his junior and senior years, he played on a travel team for the Reno Muckdogs.

“It worked out for me, so I’m happy with that,” he said. “It was always a dream of mine and I knew I had to work at it, and coming from a small town like this, it’s definitely harder to get noticed.

Although he didn’t pitch last spring, he did pitch in a big showcase tournament held by the Jayhawk Conference, which Fort Scott plays in, last September. That event draws college coaches and pro scouts, and he caught the eye of ULM coach Michael Federico. Then he pitched in a tournament in Missouri the following weekend and ended up getting an offer to pitch for ULM.

“Drew is a special athlete with an extremely high ceiling on the mound,” Federico said. “Each time on the mound for Drew he gets better. He has a chance to have special stuff. He’s a very diligent worker and is very coachable.”

Miller, who is 6-4, now weighs about 225 pounds, after graduating high school at 185. Always a hard thrower, Miller was throwing in the low 90s, topping out at 94, over the summer. He will be a reliever this spring at Fort Scott and at ULM.

“I think I can really help in the back end of the bullpen,” he said.

Miller said he likes the daily routine of a reliever better than having to wait a week between outings as a starter.

“The whole thing is I don’t have to think about pitching five days before I throw, and when someone tells me I’m pitching, I just go out there and let it fly and have fun,” he said.

Miller spent last summer working with a trainer in Kansas City, and he said what he is looking forward to most this spring is getting on the field with his Fort Scott teammates.

“A lot of personal relationships I built with those guys, and (I’m looking forward to) just being on the field with those guys,” he said. “Junior college is definitely a grind. There’s a lot of adversity you face, and I’m playing in a town with 8,000 people, so not much to do besides baseball, so it’s a grind and you’ve got to love it.”

And although he still has a season of junior college first, he’s excited to move on and play Division I baseball.

“I know they have a good program, a really good coach, a team on the rise,” Miller said. “They play in a really good conference, the Sun Belt, which has a lot of top 25 teams, a lot of talent, so I’m really excited.”