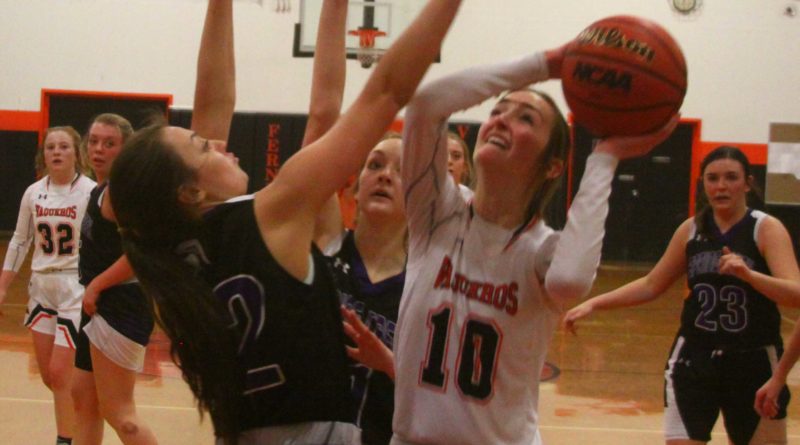 The Fernley High School girls basketball team took a 15-game league winning streak and a two-and-a-half game lead in the standings into its final home game of the season Tuesday against Sparks.

Against Dayton, the Vaqueros were dominant from start to finish, opening the game with a 15-4 first quarter lead, and finishing it with a 14-2 run in the fourth.

Last Friday, the Vaqueros beat a Spring Creek team that was back at full strength after missing several starters for the previous couple of weeks.

After leading 15-5 in the first quarter, the Vaqueros saw the Spartans cut the halftime lead to 27-23, then score the first three points of the third quarter to get within 27-26.

Sullivan responded with consecutive 3-pointers, and the Vaqueros got the lead back to as much as 43-33 on a fast break basket by Condie with 2:09 left in the third quarter, and maintained their edge throughout the fourth.

“That’s clutch, because when the ball is going in, it’s a little easier,” coach Tom Kingston said. “Any time they got close, we didn’t press the panic button so they did an outstanding job of staying poised throughout the entire contest, really.”

Kingston said the game was the type of intense, competitive game the Vaqueros will face in the playoffs.

“It’s nice to see the team where it’s together,” he said.

“The movement of the ball, our rotations on defense are more on spot than they were, our offense is getting better, they’re getting better with the whole concept of everything we’re throwing at them,” he said.

Willow Jacobson had a big night for the Vaqueros with 23 points, while Sullivan added 15 points and Condie scored 10.

Saturday’s game flow was similar to Friday, as the Vaqueros jumped ahead of Elko in the first quarter, but led by just five at the half, 28-23. But they came out of the half with a 13-0 run and outscored Elko 24-11 in the third quarter and continued to pull away.

“It’s really exciting to see that any one of our starters will have a great day, and they have been sharing the ball extremely well,” Kingston said.

Burns led Fernley with 20 points and Jacobson scored 16, while Katelyn Bunyard became the fifth player to reach in double figures in a game last week, with 13.