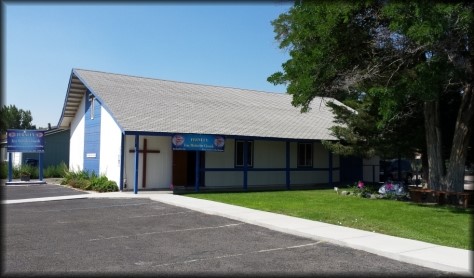 Jim Vallet, for the Fernley Reporter

In order to make disciples, Sunday worship is at 11 a.m. In addition, there is a Bible Study every Wednesday at 7 p.m., plus other spiritual gatherings that are announced periodically. Pastor Mike Moresi says, “All are welcome.”

To love others, the Fernley Free Methodist Church

Of all these good works, it was the garden which Moresi spent the most time showing me. Located just north of the church, and accessible through the Wigwam parking lot, the garden is a relaxing and welcoming place to spend a few moments listening to the brook and birds. Lounging on a bench in front of a life-sized cross not far from Main Street, the sounds of nature seem more clear than the noise of the street. This garden never closes, nor does it turn anyone away, and sadly, some vandals and thieves have taken advantage. But, Moresi believes that the good the garden does outweighs the drawbacks, and even notes that damages seem to be less common now that the garden is maintained.

Moresi has been the official pastor of the Free Methodist Church for five years, and a longtime church member before that. His position has been made more difficult because he is bi-vocational, meaning Moresi also held a full-time job besides being a pastor. This was not the situation Moresi wanted, because he could not be present for most midweek funerals and other church gatherings because he had to work. Moresi recently left his job and will see if he can make it financially as a full time pastor. Moresi says his wife, Gwen, has been involved in just about everything with the church, and her husband is certainly grateful for her help through the years. The Moresis have two grown children.

Free Methodists opposed the renting and selling of church pews, a practice that would disenfranchise the poor; Free Methodists called for tithes and offerings to support church ministries;

Free Methodists supported freedom of worship, as opposed to the formalized “methods” they saw as deadening worship in the Methodist Episcopal Church.

Free Methodists, in spite of the above, still sought to maintain the heritage of original Methodism.

Moresi said the Free Methodist Church has always stood for social justice and encouraged social reform, and points to its opposition of slavery as one fact to prove that. The Crisis Pregnancy Center housed in one of its buildings, which the Fernley Free Methodist Church supports, shows this church is still concerned about social, as well as spiritual matters. The Crisis Pregnancy Center offers free and confidential services for men and women. These services include pregnancy testing, optional peer counseling, and prenatal/maternal support. All these services are available to everyone, not just members of the Fernley Free Methodist Church, and have helped women between the ages of 12 to 55+.

Despite its small size, the Fernley Free Methodist Church has big future plans. Foremost is a new church sanctuary, one with plumbing so a bathroom could be in the same building as the church. Another plan, or maybe a dream, is a homeless shelter. There is a space that Moresi would like to use as a garden and grow food for people who need it. And, even though this church has been very generous in sharing what resources it has, its Pastor would like to improve the nature garden and try to help the community even more.

Moresi’s message to the community is, “If more people followed the teachings of Christ, it would be a nicer town. Slow down and spend time with the community. God works it out. There are no regrets here. It’s been a battle, but I’d do it again.”

My message is that Fernley is lucky to have a church that cares for this community the way the Fernley Free Methodist Church does.

Jim Vallet and his wife Melanie moved to Fernley from Moapa Valley in June. He will be writing occasional columns about Fernley from the perspective of a newcomer, as well as stories about local people who are making a positive difference in the community.