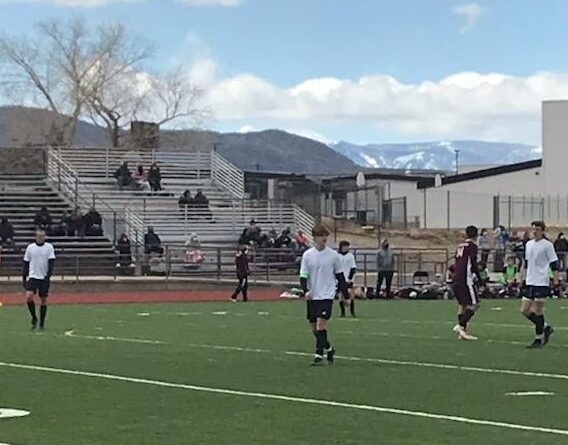 After two losses and a tie in their past three games, plus a forfeit because of a transportation issue, the Fernley High School boys soccer team is looking to get back on track this weekend with a pair of games against Lowry and Elko.

That Elko game was the third of the season for the Vaqueros, following two wins to begin the season. The game was played in unpredicted weather that day, as the snow arrived out of nowhere. The opening minutes were a back-and-forth game, with both teams coming close to opening the score. About 15 minutes into the game, one of the Vaqueros’ captains, Isaac O’Neil went in for a hard tackle and hurt his left foot in the process. He had to leave the game early, and the Vaqueros had to finish the game without their best player on the field.

“Without Isaac, our formation had to change, and we had to move players into positions that are not natural for them,” assistant coach Dario Arriaga-Campos said.

Elko scored the opening goal right before the end of the first half. All players played a tough game in the snow for the duration of the game, but Elko came out on top at the end, netting a second goal in the second half. The game ended 2-0.

“But the worst loss we took that day was losing two of our most important players to injuries, as Hayden Fagundes finished with a strained hamstring at the end of the game,” Arriaga-Campos said.

The Vaqueros had to readjust quickly, with another game five days later against Fallon March 15.

While wanting to bounce back from the loss against Elko, they had to play the game without four starting players who were either out because of injury or grades.

“It was an opportunity for players that are not starters, to fight for a spot in the starting lineup,” Arriaga-Campos said. “Unfortunately, we could not find the back of the net.”

Fallon played a tough game and was able to put away a goal in each half to take the game 2-0.

“The games have been tough to play without our complete squad, but that is no excuse to be performing the way we are,” Arriaga-Campos said. “Coach Jose (Garcia) and I are not ones to make excuses, and that is not going to start now. There are 21 players on the team, just because four of them are injured, or cannot play, does not mean our season is over. Other players will need to step up and fill those positions.”

Fernley’s scheduled game against Spring Creek on Friday, March 19 was canceled and the Vaqueros took a loss as a forfeit because there was no bus available for the trip.

The next day, Saturday March 20, they had an away game against Dayton.

“Playing in Dayton is always difficult, they always play a little more tough games with their passionate crowd behind them, Arriaga-Campos said.

The first half was a back-and-forth game with the opening goal coming from Dayton, in the form of a penalty.

“The Dayton fans celebrated the goal loudly, which did not sit well with our players,” Arriaga-Campos said.

From that point forward, Fernley had possession of the ball for most of the game. Right before the first half ended, Braeden Garrett produced a play where the Dayton goalkeeper spit out the ball and it landed right onto the foot of Broderick Garrett, Braeden’s older brother. Broderick took a shot and was able to easily place it in the back of the goal since the Dayton keeper was out of position. The half ended 1-1.

“Our defense had to step up in this game, since we still did not have Isaac or Hayden in the backline,” Arriaga-Campos said.

A player who started out the season on the JV team, and on the bench for the varsity, is Jancarlos Pineda.

“Jancarlos has shown a tremendous amount of growth and has been a player who stepped up to help our defense,” Arriaga-Campos said. “In the second half, Jancarlos, Caleb Mortenson and Drake Lanning were solid in the back and did not allow Dayton to get close to our goal. We controlled the second half and were able to get some shots on target but could not find the back of the net.”

On one play where Broderick Garrett headed the ball and it looked to bounce over the goal line, Fernley fans and bench even cheered because they were certain it was a goal, but the official did not count it.

“Coach Jose and I were certain that the ball had gone in, but the officials that day were not in our favor,” Arriaga-Campos said. “It would have been a perfect finish to the game, since Broderick (Brody as we all call him), had played one of the toughest games we have seen him play. He did not stop running one second during the game. He contested every ball and is a very important player for us in the midfield. He was the MVP of the game.”

The Vaqueros are 2-3-1 overall, with four games remaining.

“We have work to do prior to this weekend,” Arriaga-Campos said. “We have tough back-to-back games.”