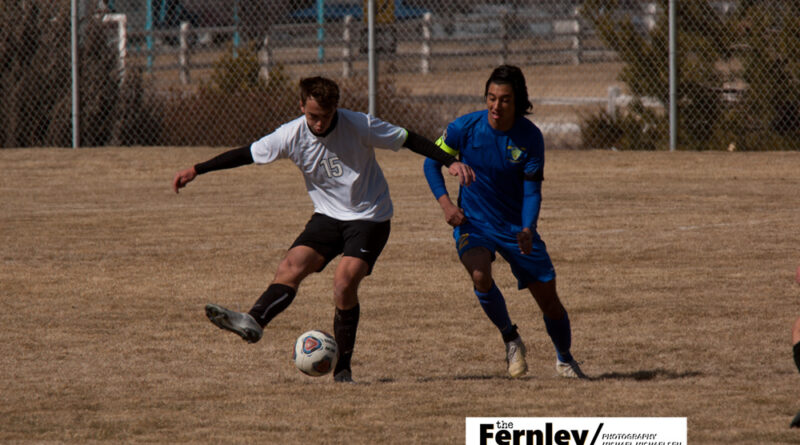 The Fernley High School boys soccer team has been the best team in their division the past two seasons.

A realigned Northern 3A might bring some new challenges, but it’s so far, so good for the Vaqueros.

Fernley opened its season with a 3-2 win over Dayton last Tuesday, then beat Lowry on Saturday, to start their abbreviated spring season with a 2-0 record.

Against Dayton, the team’s only senior, Carson Humes, had the opening goal of the game, and of the season. He exploded down the right side of the field and shot it in the left corner of the goal. Robbie Whalen had the second goal of the game to put the Vaqueros up 2-0 before halftime. Dayton came back in the second half and scored two goals before Isaac O’Neil stepped up and scored the game winning goal.

“Dayton has always been a rival team and the boys were excited to kick off the season,” assistant coach Dario Arriaga-Campos said. “We started out the game well, but Dayton is a tough physical opponent that never makes it easy.”

Arriaga-Campos said It has been a very different season, due to the pandemic, but the Vaqueros have been trying to make the most of it.

“Overall, it was a tough game, we had plenty of opportunities to put the game away and not have it be such a close score, but we could not finish,” he said. “That is something that we will have to work on prior to the next game.”

Saturday in Winnemucca, the wind was blowing hard, and the Vaqueros lost the coin toss and had to play against the wind in the first half. Head coach Jose Garcia  told the team to keep the ball low and to focus on passing the ball quickly.

“The boys played a great first half and controlled the game, even with the wind blowing against them,” Arriaga-Campos said.

The Vaqueros were up at halftime 4-1 with goals from Humes, Jacob McCreary (2), and O’Neil.

“We knew we could come out on top in the second half, since we were able to control the game in the first half against the wind,” Arriaga-Campos said. “The game plan did not change with the wind in our favor, pass the ball quickly and keep possession.”

In the second half, the Vaqueros put in another 3 goals while shutting down the Lowry offense. Jack Lutkenhouse, O’Neil, and Landon Messerschmidt were the goal scorers in the second half.

“This was a great game played by the boys, we saw the hard work that they have been putting in during practice and seeing them transfer it onto the pitch was special,” Arriaga-Campos said. “It was a game well played by everyone, and a special shout out goes to our back line for shutting down the Lowry offense.”

The Vaqueros have a solid back line in Hayden Fagundes, Drake Lanning, Caleb Mortenson, and O’Neil.

They have one of their toughest games coming up this Wednesday at home against Elko.

“We appreciate all the support from the parents who cheer us on throughout every game,” Arriaga-Campos said. “We hope to see you all there on Wednesday.”