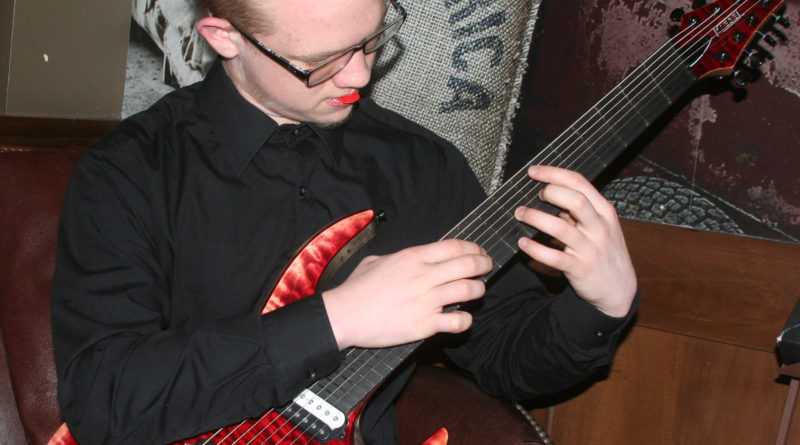 Jason Rader isn’t one for limits.

Not the limits of the sounds from the holes of an ocarina, or the ones that say it takes four years to accumulate 22 ½ high school credits.

Rader embarked on an accelerated high school program with plans to become a professional musician, and was able to graduate in a year because Fernley High School principal Kent Jones gave him a chance, and Rader found a way to make it work.

“It’s unique and I don’t know that I’d recommend it to everybody, but we as a school have all these classes and programs, and not always does that necessarily fit every kid,” Jones said. “Once in a while, you have to fit a program around a kid. There are kids even on the lower end, and the high end, who just don’t fit.”

For Rader, the lesson is much simpler: if you want to do something, you just have to find a way.

“The key to anything is thoughtful determination,” he said. “I don’t think of myself as a super genius, but I don’t have a frame of reference. I just think I like to learn.”

A passion for music

Rader attended Double Diamond Elementary School in Reno for most of his elementary years, and in third grade, was bumped up to fifth grade math and put into a Gifted and Talented program.

“By sixth grade, I started to get this feeling like, I’ve been taught this five times,” he said. “In seventh grade, I was more interested in discussing other things with teachers rather than their subject. That was around the time I got into music.”

Rader started by playing the ocarina, a clay vessel flute, shaped somewhat like a sweet potato and popularized by the fantasy video game Legend of Zelda. Rader started to play the instrument five to six hours a day, but soon found it too limiting.

“If you want to play a different timbre or range, you have to pick up another instrument,” he said.

Rader played the baritone saxophone in eighth grade band, and as he became interested in classical music, decided he wanted to learn the violin.

However, Rader said, his dad resisted spending the money on a violin, pointing out how quickly he’d moved past the ocarina and sax. As luck would have it, Rader found a violin and a mandolin at a garage sale.

Rader soon discovered the music of Chris Thile, a mandolinist, singer and songwriter who played acoustic folk and bluegrass music.

But Rader had gotten a guitar the previous Christmas. He eventually watched an instructional video and began the transition from mandolin to guitar. That’s when he knew he had found his instrument, and began to play religiously.

“It’s pretty much the opposite of the ocarina,” Rader said. “It’s limitless, and you can use different techniques to change timbre based on different things.”

“That introduced me to the idea that there’s maybe more than power chords,” he said.

From there, he found Josh Martin, who plays eight-string electric guitar in a band called Little Tybee, a progressive folk rock band based out of Atlanta, Ga.

“He does glitch tapping and butterfly tapping and other crazy tapping techniques,” Rader said. “That’s what got me into Chris Thile; he’s trying to find a place in between the visceral and the academic.”

Rader spent the summer before eighth grade playing six hours a day, but when school started, he didn’t have much time to play.

“And that’s what led to the decision that I need to graduate faster,” he said.

Rader’s first idea was that he could complete high school in two years.

“I looked at what the federal government, the State of Nevada and Fernley requires, and it kind of worked out,” he said.

Before his eighth grade year ended, he met with Jones to talk about the idea.

Rader’s mom, Becky Boehner, had the feeling that Jones was just trying to appease them. But Jones had already gotten a call from Silverland Middle School principal Ryan Cross, and was open to the idea, if Rader could prove it could be done.

“Mr. Cross called me and said Jason is focused on what he wants to do with his life,” Jones said. “When I met with (Rader) at the end of the school year, I just listened to what he wanted.”

Jones suggested that if Rader qualified for Western Nevada College’s Jump Start Program, he could look at high school as a two-year program. Jump Start began as a dual-credit program for seniors, and expanded last year to admit qualified juniors, and those students who complete two years of the program receive an associate’s degree.

Rader tested high on the Accuplacer tests for Jump Start and was accepted.

The other part of Rader’s plan was to take as many courses as he could through Lyon County’s A+nyhere Learning System, an online alternative education program that is often used for credit recovery by students who have fallen behind, as well as an alternative for advanced students, students homebound by medical problems, and students with other issues that prevent them from attending school regularly.

For each A+ lesson, students must receive a certain score on the mastery test in order to go on to the next lesson.

Rader said he averaged between 10-12 lessons a day.

Rader’s day consisted of seven class periods, starting with jazz band, the only band that let him play guitar. Second period was Honors chemistry, third, fourth and fifth were Jump Start classes, sixth period was A+ and seventh period was weights, to fulfill the physical education requirement.

“I was almost never able to get done in school, Rader said. “The most I got done in one day in seat was 12 lessons. Usually I’d get about four done at school and the other six at home.”

But as the first semester came to a close, Rader realized he was making even more progress than he’d thought he would, and that the music schools he wanted to attend wouldn’t accept the second year of Jump Start credits.

“So there was no reason for me to do the second year,” he said.

He decided he could complete all four years of high school in one year, if Jones would let him.

He first broached the idea with counselor Melissa Hoover, who relayed it to Jones.

Again, Jones asked Rader to show him a plan.

“I asked him to map out how you’re going to complete all these courses and show me this can be done,” Jones said. “He walked in with a plan, detailed to the hour how this can be done, and he even included an hour a day for the guitar. He’s completed everything with a week to spare.”

“I’ve heard the idea that it stifles creativity, but I think it would be great,” he said. “I live in Fernley. There’s musicians here, but not like in Atlanta or Boston. I want to work in that environment, meet those people and form those connections.”

But the holdup is what Rader calls ‘The Mom Law’.

“My mom says I can’t leave until I have my driver’s license,” he said. “I have to agree; it would be pretty crazy to go all the way across the country without being able to drive or having a license.”

Rader recently purchased a custom Kiesel Carvin 8-string guitar, and he plans to spend the next six months, while he waits to turn 16, practicing the guitar and applying for scholarships.

“They sound interesting, kind of acoustic sounding,” he said. “They don’t take up as much space.”

Rader plays everything from folk, progressive metal, classical and jazz, and hopes to work on getting some recordings out in the next few months. And, fill in the biggest gap in his musical repertoire.

“I can read sheet music pretty well for everything but my main instrument, the guitar,” he said.

Rader also hopes to help out in the community as much as he can in the next few months.

“I want to volunteer a bit, just help out people anywhere, any way I can,” he said. “And I want to work with some producers about how to go from where I’m at to where I want to go.”