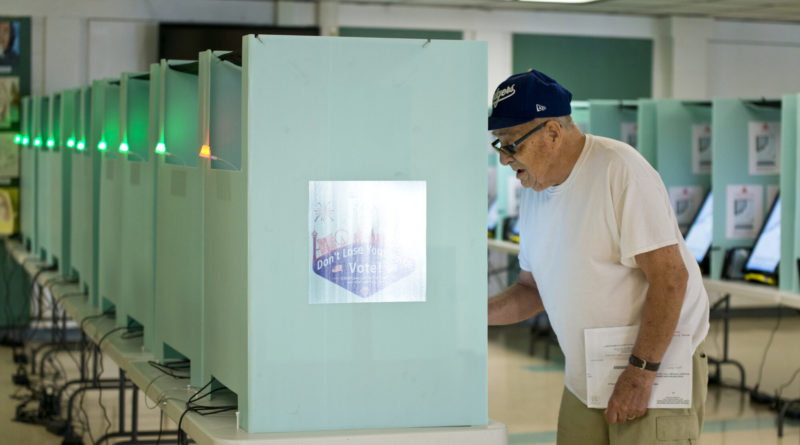 By Riley Snyder and Jackie Valley

Nevada election officials are planning to effectively cancel in-person voting and move the state’s primary election on June 9 to mail ballots only in the wake of the coronavirus crisis gripping the nation, Secretary of State Barbara Cegavske announced Tuesday.

It’s the latest activity facing a logistical change as officials try to prevent the spread of the upper-respiratory disease. Questions have surfaced regarding the safety of in-person voting, a process that can trigger lines of people and multiple surface touch points as voters make their selections.

Under the plan for the primary election, all active registered voters will receive an absentee ballot in the mail — no request necessary — and can mail it back free of charge, officials said. They can also drop it off at a designated county location.

Cegavske said the decision was necessary as the training of thousands of poll workers was scheduled to begin next week, and a significant number of public health concerns would come from bringing all of those poll workers together.

“Because of the many uncertainties surrounding the COVID-19 pandemic, as well as the immediate need to begin preparations for the 2020 primary election, it became necessary for me to take action regarding how the election will be conducted,” she said in a statement. “Based on extensive conversations with Nevada’s 17 county election officials, we have jointly determined that the best option for the primary election is to conduct an all-mail election.”

Cegavske said that there will be at least one in-person polling location in each county to handle same-day voter registration and to assist voters who have issues with their mailed ballot, and that the locations will be set up “to ensure the safety of voters and poll workers alike.”

The mail-only election carries some caveats, though. For instance, absentee ballots must be dropped off in person or postmarked by election day and received “no later than seven days after the election” to be counted, officials said. Voters’ signatures also must be on the ballot and match the ones one file; otherwise, election officials will contact the voter, who has seven days to make the correction.

“It is important to understand that these deadlines will result in updating vote totals and election results for up to seven days after the election,” officials said in a statement. “Close races may remain undecided until all ballots are counted.”

A recent legislative change allows any voter to request a ballot by mail, but must make the request by no later than the 14th calendar day preceding the election — May 26 for this election cycle. Delivery of mail ballots begins no later than 20 days before Election Day.

Although several other states including Oregon and California have widely adopted a mail-based voting systems, most Nevada voters prefer casting ballots in person. In the 2018 general election, only about 9 percent of ballots were cast through the mail or absentee.

At least seven states scheduled to vote in the 2020 Democratic presidential primary — Georgia, Connecticut, Indiana, Ohio, Rhode Island, Louisiana and Kentucky — have delayed their elections by several months to avoid public health risks posed by the virus that could be exacerbated by a large number of voters heading to the polls.