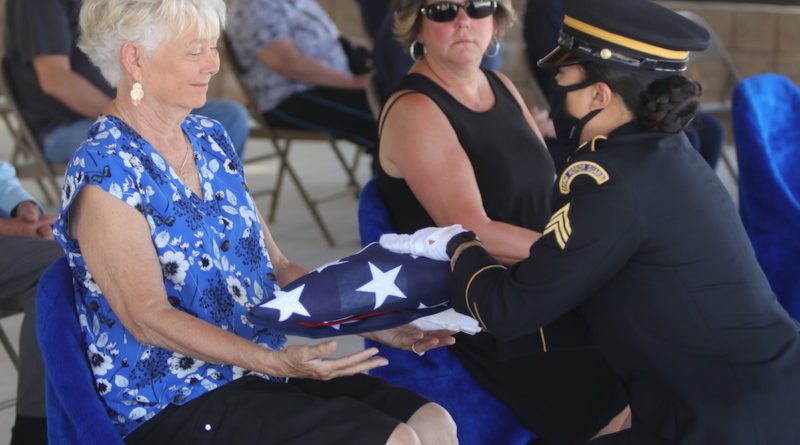 Because of restrictions placed on state facilities because of the coronavirus pandemic, all services were placed on hold, although the individual veterans were interred at the cemetery. The state cemetery is one of two located in Nevada. The other cemetery is located in Boulder City.

NVC member and narrator Sharon Serenko said the service gives veterans their final closure and thanks them for their duty to country and their heroism to service. She reflected on the veterans as defenders of freedom, country and flag and said their deeds will live in our hearts.

“Every monument tells a story of a life given in service to others,” Serenko stressed.

After reading the names of the 24 veterans, she said it was an honor to know of these men and women.

“Soul after soul, we shall follow these departed veterans into the eternity beyond,” she said.

One such veteran was Fernley resident Robert Kizer, who served in the Navy during World War II.

As an 18-year-old gunner, Kizer never regretted enlisting in the Navy during World War II. The Navy petty officer first class said he felt fear every time he climbed into a TBM torpedo bomber, lifting off from an aircraft carrier in search of the enemy.

Known as one of the heaviest single-engine aircraft during World War II, the General Motors-built TBM Avenger flew a crew of three: a pilot, turret gunner and a radioman/bombardier/ventral gunner. In the bomb bay the Avenger carried one large torpedo or a single 2,000-pound bomb. Sometimes, crews would swap out one large bomb for four 500-pounders.

The service included a three-round volley from the NVC honor guard, the playing of “Taps,” a flag-folding ceremony conducted by Nevada Army National Guard soldiers Sgt. Christine Aguilar and Sgt. Manuel Monroy. Aguilar then presented the flag to Diane Martinez.