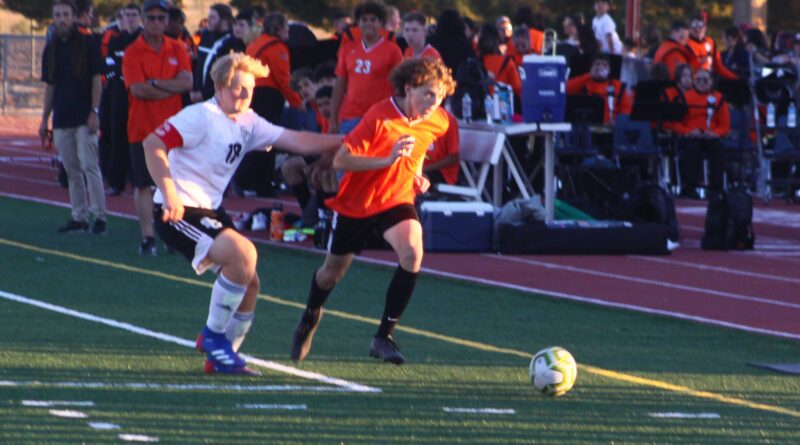 On a Homecoming night on which the football game had been canceled and soccer became the feature attraction, the Fernley High School boys soccer team took advantage of the spotlight to earn its first win of the season.

The Vaqueros beat Spring Creek 3-2 last Friday night in a game that was moved to 5 p.m. and which included the traditional Homecoming festivities at halftime, instead of their usual place at halftime of the football game. Fernley’s Homecoming football game against Spring creek was canceled because of positive Covid-19 tests within the Spring Creek team.

The Homecoming King and Queen were announced at halftime, and Kamrin Allen, this year’s Homecoming Hero, was introduced, along with an announcement that the Homecoming Week’s fundraising efforts had raised several thousand dollars to be donated to his family.

The game was played in front of packed home bleachers, with fans also standing along the fence and with the band, cheerleaders and dance team performing. Coach Matt Gallagher said the atmosphere, and the much bigger crowd than the team usually plays in front of, made a difference.

“Hopefully whoever got sick with Spring Creek or whatever happened, they fell better, but I was very happy to hear that soccer was going to get the main event tonight,” Gallagher said. “Definitely happy to have this crowd, the boys were so happy to get out there and do it for Kamrin, and everything came together. It’s a good night overall.”

In the game’s 72nd minute, Brody Garrett got wide of the Spring Creek defense and took a crossing pass from Jake McCreary, then got the ball past the Spring Creek goaltender for what turned out to be the game-winning goal.

Center back Drake Lanning had stolen the ball from a Spring Creek player at midfield and sent it ahead to McCreary, who got around a defender before sending the ball across the formation to a steaking Garrett. Gallagher said the teamwork on the winning goal was an example of how the team played the entire night.

Fernley had led 2-1 at halftime on goals by McCreary and Garrett, but Spring Creek tied the game with a goal about midway through the second half.

The Vaqueros followed Friday’s game with a win and a tie in their next two league games and are now 1-1-1 in league play. They lost 7-2 to Elko on Saturday and tied Fallon 1-1 Thursday.

McCreary scored both goals against Elko, while Garrett scored Fernley’s goal against Fallon.

The Vaqueros are scheduled to host Lowry Saturday at 11:45 a.m.