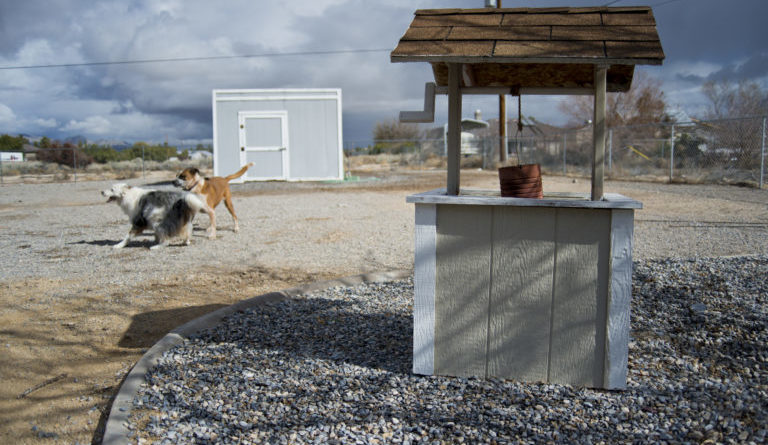 The signs of water scarcity are evident around Lake Mead.

During nearly two decades of drought, the reservoir that holds back most of Southern Nevada’s water supply has dropped to record lows. But this is not a story about Lake Mead. The country’s largest reservoir, filled by the Colorado River and held back by the Hoover Dam, might be the state’s most visible sign of aridity, yet for many Nevadans, it’s what you can’t see that’s far scarier.

About 30 miles upstream of Lake Mead, the small Muddy River rises out of thermal springs and snakes its way to the reservoir. As it travels to Lake Mead, the river runs above several water sources that are blind to most observers. These sources are aquifers, geologic structures that store water underground, and in much of the state, they provide Nevadans with most of their water.

Yet many of these aquifers face a crisis rooted deep in the state’s history.

In dozens of groundwater basins across the state, there are more rights to water than can be sustained by the aquifers, according to federal hydrology studies and the state’s analysis. There are 256 groundwater basins in Nevada and 84 of them are out of balance. In 26 basins, there are more than 300 percent more rights to water than what is thought to be sustainable. The issue is that fixing the problem is not only a hydrologic issue but a political one.

State Engineer Jason King, Nevada’s top water regulator, has made the state’s over-stressed groundwater basins a priority for his office, and in a recent interview, he urged the creation of collaborative, local plans to fix the problems that come with over-appropriation. But over the last few years, he’s also taken actions on his own, often to an outcry that has resulted in litigation. Mark Twain might have said “whiskey is for drinking and water is for fighting over.” In the contemporary West, “fighting over” takes place in the courts.

“Right now, in our water law, there are very few tools,” King said.

At a meeting in Overton at the end of July, the state engineer addressed a room full of water users, including representatives from Coyote Springs, a proposed mega-development 60 miles outside of Las Vegas that would tap into one of the basins connected to the Muddy River. The meeting took place two months after King said he could not “justify approval of any subdivision development maps” for Coyote Springs because there was not enough water.

The state’s hydrologic models and pumping tests suggest Coyote Springs Valley is a prime example of the issues around the right to pump groundwater. The state engineer has said the science suggests that more water rights have been issued to water users than the groundwater basin can support.

This is known as over-appropriation, and it is common among rivers and basins throughout the West. Western water law provides a way of dealing with this problem through a doctrine known as “prior appropriation.” In times of scarcity, water users with the most senior right have the first priority to water.

And Coyote Springs has newer rights, what are known as “junior rights.”

Water law is set up to protect senior rights, and the state engineer has argued too much groundwater pumping in the basin could harm older rights and draw down the Muddy River, imperiling a threatened fish species, the Moapa dace.

But once a water right — even a junior right — has been issued, it’s hard to curtail it.

“Coyote Springs Investment rejects the imposition of any restrictions on the use of its water and asks that all decisions of the state engineer be transparent and motivated only by science,” Emilia Cargill, the development’s chief operating officer said in public comments, according to an audio recording, after the state engineer made a presentation at the Overton meeting.

If water users don’t agree on a solution to over-appropriation, they agree on the source of the problem: the state engineer’s office. Not King himself, but the office that he now represents.

Water users across the state blame, in retrospect, past state engineers for over-appropriation. The reality is not always that simple, yet even King has conceded that there was a laissez-faire attitude among past regulators when it came to over-appropriation. The thinking was that water users would not put their entire allocations to use so it would be OK to over-permit water rights.

In the earlier days, a poor understanding of hydrology and the aridity of the West also contributed to the problem.

Federal land policies, meant to encourage the settlement of the West, also played a major role. Before the U.S. government took a more active role in managing and organizing Western land and water in the late 1800s, settlers came to Nevada under the Homestead Act and the Desert Land Entry Act. To those who came under those acts, water rights were easily granted.

This turned out to be a problem for a basin like Diamond Valley outside of Eureka.

“[The people who came here] did what they were legally required to do. The problem is that the federal government and the state engineer never drew the line in those early days. It was a land rush. It was a free for all,” said Jake Tibbitts, Eureka County’s natural resources manager.

In Diamond Valley, the crop is alfalfa. At the edge of Eureka, looking down into the valley, is a long line of crop circles, the result of center-pivot irrigation systems that have helped stabilize the regional economy, which would otherwise be exposed to the boom-and-bust cycle of mining.

What happened in Diamond Valley was never supposed to happen. More often than not, Desert Land Entry attempts failed. But in Diamond Valley, the success rate was high. That meant that far fewer people gave up their water rights and by the 1960s, the basin was over-appropriated.

There are now about four times more rights to water than the basin can handle.

But the valley also provides a case study for one way out of the problem.

In 2015, Diamond Valley was the first basin King declared a Critical Management Area. The designation allowed water users to come up with a groundwater plan that went slightly outside the strict tenets of water law.

Their solution was to propose a water market whereby groundwater rights would be converted into shares and could be traded. A market, they said, would allow for more flexibility and encourage conservation. The proposal is a departure from Western water law in that it requires a sacrifice from everyone, including those with senior rights. The plan has been palatable because most of the valley’s water users — 90 percent — have a mix of junior and senior rights.

On July 24, the same day King held his meeting about the Muddy River in Overton, water users voted to approve the groundwater management plan and send it to the state engineer’s office for his review and approval. Tibbitts said more than 53 percent of 99 water users voted in favor of the plan.

King said that he would like to see more basins develop localized groundwater plans as long as they “do right by the resource” in achieving the goal of bringing aquifers back into balance and curbing the practice of over-pumping.

“I am a big proponent of groundwater management plans that are developed by the individual water rights holders in those basins in conjunction with our office,” King said.

Yet even in Diamond Valley, where a majority of water users support a solution, there has been litigation. In the annals of Western water law, there is one thing that trumps both senior and junior rights — “vested rights” that predate water law. And Sadler Ranch, located at the edge of Diamond Valley, has vested rights to a stream that has run dry because of years of over-pumping.

“The bottom line is that we want the state engineer to follow the law,” Doug Frazer, the ranch’s co-owner told Water Deeply in an interview last year. “The law is really basic and it’s really simple. First in time and first in right.”

In many ways, Nevada’s groundwater situation is less dire than it is in neighboring Western states. Until recently, California did little to regulate its groundwater, causing aquifers to dip, especially during the drought when irrigators were cut off from normal surface water supplies. In the last century, large parts of the San Joaquin Valley have dropped 28 feet, according to E&E News, a trade publication that covers energy and the environment.

Most experts and hydrologists agree, though, that the situation is unlikely to get better on its own. Prolonged drought conditions throughout the West and in Nevada loom in the background of many conversations about groundwater. As air temperatures continue to warm and snowpack patterns change, it adds another layer of uncertainty on basins that are already over-stressed.

At the same time, ideas around managing water resources are changing.

In the past, groundwater and surface water, such as rivers, were often viewed as separate systems. The state engineer’s office, at the urging of many different groups, has started to look at the two resources together.

“We need to look at it as a whole continuum,” Berger said.

None of this happens in a bubble and changes to Nevada water rules can be the source of intense political wrangling. In 2016, the state engineer had floated a legislative fix to stem the continued over-appropriation in the groundwater basin that serves Pahrump, about 60 miles outside of Las Vegas.

When the legislative proposal was killed, the state engineer issued an order in December placing regulations on drilling new domestic wells that tapped into the aquifer, which would bring more water rights into the basin.

The order led to a swift reaction from local politicians and played heavily into local races during the primary. In a bitter primary between Assemblyman James Oscarson and brothel owner Dennis Hof, water emerged as a key issue. “Fight hard for our water,” Hof declared on a billboard in March. Across the highway, a billboard for Oscarson read: “Fighting for your water rights!”

A group of well-owners organized under the name Pahrump Fair Water LLC organized to protest the order and plan to raise the issue during the general election. They are frustrated that Attorney General Adam Laxalt is defending King’s order, although Laxalt’s office has pointed out that, as the state’s attorney general, he is statutorily obligated to defend the state engineer.

The state engineer said he has noticed an overall increase in litigation in recent years.

“It seems like litigation is releasing a critical mass,” King said.

When it comes to water law, the courts can be unpredictable and often make decisions that are more consequential and severe than orders that come down through the administrative process. In 2015, as farmers lost surface water during the drought, the 11th Judicial District Court of Nevada ordered the state engineer to protect senior rights in the vast Humboldt River Basin by curtailing groundwater pumping in 19 aquifers, a decision that the Elko Daily Free Press has reported on extensively.

To avoid the order, the state engineer has been working in a collaborative process on finishing regulations to conjunctively manage the Humboldt River with groundwater pumping in the 34 basins that the river intersects with. As part of the process, the state is conducting a four-year hydrology study to better understand a river system that runs from Elko through Lovelock.

“We want to manage the water,” Rick Felling, a deputy administrator in the state engineer’s office said last year, the Elko Daily Free Press reported. “We don’t want a judge to manage it.”