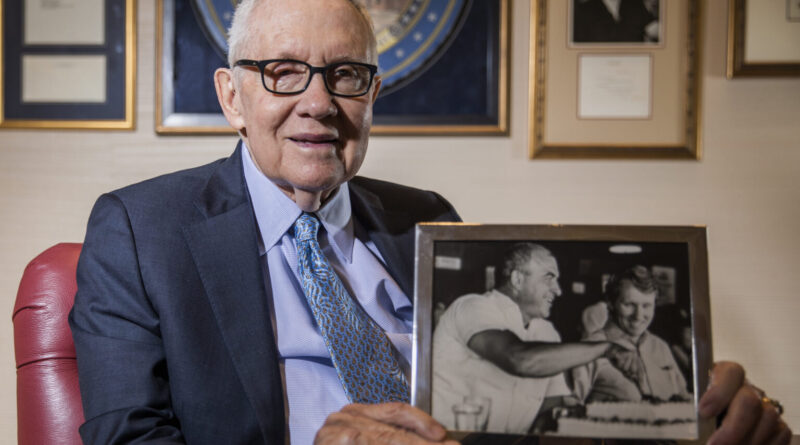 Whether they were political allies or adversaries, officials across the state and the country reacted to the news of the death of former U.S. Sen. Harry Reid Tuesday with their remembrances and support for his family.

The former Senate Majority Leader who served more than 30 years in Congress died at home Tuesday after a four-year battle with pancreatic cancer. He was 82.

Reid was first elected to the U.S. House of Representatives in 1982 and served two terms, then was elected to the Senate in 1986. Among his work that directly affected Lyon County was the Truckee River Operating Agreement and the lands bill that allowed the city of Yerington to annex the land at Pumpkin Hollow for the Nevada Copper mine and created the Wovoka Wilderness south of Mason Valley.

“Nevada has lost an historic figure with the passing of Harry Reid,” said former U.S. Sen. Dean Heller. “While we rarely agreed politically, we shared a common faith and he’ll be deeply missed. Lynne and I send our deepest condolences to Landra and the entire Reid family.”

Former governor and current University of Nevada, Reno president Brian Sandoval called Reid one of the towering figures in the history of Nevada.

“The Senator’s career in public service belongs on the state’s Mount Rushmore as an example of a legendary leader who always put the needs, dreams and future of the people of Nevada first,” Sandoval said. “The University of Nevada, Reno will always be incredibly grateful for the support Senator Reid showed higher education throughout his career in the House of Representatives and then the United States Senate.”

Pyramid Lake Paiute Tribal Chairwoman Janet Davis said the Tribe is thankful that Reid provided a voice for the indigenous tribes of Nevada.

“We are forever grateful for his commitment and foresight in preserving our tribal waters with the passage of the historic Truckee River Operating agreement,” Davis sad. “This monumental bill provides spawning flows for our endangered cui-ui fish and the threatened Lahontan cutthroat trout.”