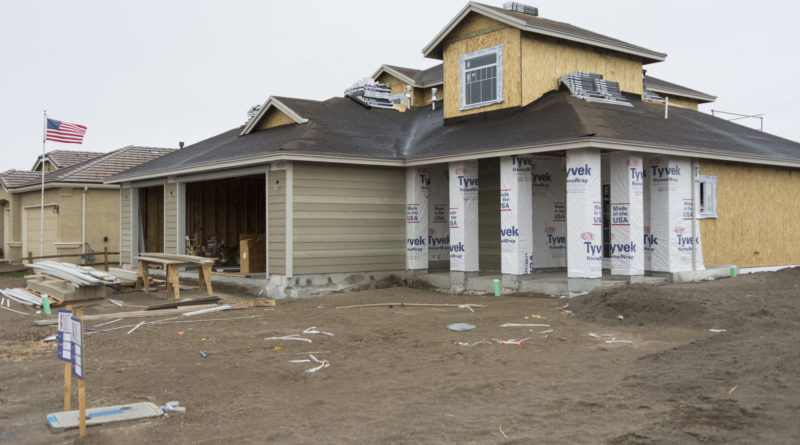 When Cal Eilrich hits Vista Boulevard while driving east on Interstate 80, he breathes a sigh of relief. It’s the last interchange on the outer rim of the Reno-Sparks metropolitan area.

“I actually wind down a bit,” he said.

The juncture means Eilrich is that much closer to Fernley, his home since 1993 that lies 30 miles east of Reno. The incorporated city boasts 19,000-some residents and a literal Main Street dotted with a Family Dollar, several salons, a tattoo parlor, used car lot and a longtime restaurant and casino, among other small businesses.

Once Nevada’s fastest-growing city, the former ranching community more than doubled its population during a building boom that started in the late 1990s and lasted until the economy tanked during the Great Recession. Fernley then earned a not-so-coveted reputation — the place with the nation’s highest foreclosure rate at one point.

“We were left with a lot of abandoned subdivisions and foreclosed homes,” City Manager Daphne Hooper said.

But it’s no longer a dormant community. A housing crunch in Northern Nevada has forced some residents to seek more affordable options outside the traditional Reno market.

As economic activity picked up in Reno, fueled by big-name companies such as Tesla, Switch and Amazon moving to the region, home prices soared in the self-proclaimed Biggest Little City. It’s a function of supply and demand: Northern Nevada’s housing inventory hasn’t kept pace with the number of people moving there for jobs, thus driving up costs in the process.

Enter Fernley. The quiet city boasts a median home price that, while up 27 percent from a year ago, still remains more than $100,000 less than what it is farther west. The Reno-Sparks Association of Realtors reported in October a median home price of $348,500 for the greater Reno area, which includes Sparks, compared with a $241,500 median price in Fernley.

Plus, Fernley sits 18 miles from the mammoth Reno-Tahoe Industrial Center, which counts Tesla, Walmart, Google, Zulily and Switch among its anchor tenants.

“People were moving here before all the jobs for quality of life,” said Eilrich, a former city councilman and incoming president of the Fernley Builders Association.

Now, they’re coming for the relative bargain as well. Seven subdivisions are building homes again, many on lots that were developed before the economic crash, he said.

The hum of home construction in Fernley is a sound some Northern Nevada leaders say should be more prevalent across the region. They warn that inaction could make a bad problem worse, endangering the economic renaissance the city is experiencing.

Others disagree. They argue building too many homes too soon could place the region in jeopardy of another housing bubble.

If you ask the man who leads the Economic Development Authority of Western Nevada about the housing situation, he’ll appear visibly frustrated. He considers this a belated conversation.

“We’re creating a social problem,” said Mike Kazmierski, president and CEO of EDAWN. “We’re not addressing the needs of the region.”

Kazmierski has been sounding an alarm about the region’s housing problem for more than two years. He penned an op-ed for The Reno Gazette-Journal in July 2015 warning of an impending housing crisis because of the region adding an estimated 50,000 new jobs by 2020. Eighteen months later, in February 2017, he submitted a follow-up piece with a more dramatic headline: “Reno’s housing sky is falling.”

“The first thing we must do is understand that THIS IS NOT A BUBBLE!” he wrote, noting that 20,000 jobs had been added but only 4,000 new housing units.

Kazmierski rejects the notion of an emerging bubble, pointing to the strong job growth and low unemployment rate. The Reno area’s unemployment rate fell to 4 percent in September, according to the Nevada Department of Employment, Training and Rehabilitation.

“Jobs are not speculative,” he said. “What’s speculative is when somebody takes out a flaky loan and buys a house based on a job they may not have forever … We are in a job-driven growth mode — not a speculative-growth mode — and as long as our jobs continue to grow, we will continue to have increasing and sustainable demand.”

Those who, like Kazmierski, downplay suggestions of a bubble say they don’t see risky lending practices, investors buying scores of homes or signs of a slowdown in job growth, all of which contributed to the last housing bust. Northern Nevada’s housing needs, they say, are real and growing more urgent by the day.

By Kazmierki’s estimate, the Reno area needs to add 6,000 new housing units — which could be a combination of single-family houses, townhomes and apartments — to the market each year to keep up with the growth.

His number is slightly more conservative than the one proffered by Nevada’s chief economic development officer, Steve Hill, who said there are about 1.35 jobs per household. Because the region has been adding about 10,000 jobs per year, it needs roughly 7,000 new housing units to meet demand, he said.

“The price of housing could moderate if we work toward building the number of housing units we need, which we’re not doing right now,” Hill said. “There’s a shortage.”

But even if homebuilders ramp up construction, will buyers be able to afford the homes?

Housing affordability remains a chief concern for economists and real-estate officials studying the Reno market. Browse websites such as Zillow or Trulia, which feature homes for sale, and you’ll be hard-pressed to find many Reno-area listings under $300,000. Those that do fall in the $200,000 range or lower are usually older and smaller, two-bedroom houses or condominiums.

Median sale prices dipped in August and September this year, which officials attributed to the market’s “seasonal cooling,” before increasing again in October.

The problem: Inflation-adjusted wages largely have been stagnant and certainly not increasing as much or as fast as housing prices. Nevada’s median household income in 2016 was $55,180, which is slightly below the national average of $57,617, according to the U.S. Census Bureau.

Given the steep housing prices, some would-be buyers can no longer afford to enter the market, so they’re renting instead. That, in turn, has driven up rental rates, leaving people at the very bottom of the income spectrum without many options. (The average monthly rent in the Reno-Sparks area grew to $1,194 in the second quarter of this year, according to an apartment survey by Johnson Perkins Griffin, a real-estate appraisal and consulting firm in Northern Nevada.)

“Basically, the inequality of it is part of the problem,” said Elliott Parker, an economics professor at the University of Nevada, Reno. “We have rising inequality in Nevada.”

That phenomenon is why Eric Novak, president of the Praxis Consulting Group in Reno, said it’s possible for the city to be experiencing a housing bubble simultaneously with a housing crisis. As affordability becomes an increasing issue, Novak said he already knows some people who have moved away from the area.

And, on the rental side of the market, he said much of the construction activity is for higher-end, multi-family dwellings as opposed to housing units for displaced, low-income residents.

“Sure, that will take some of the strain off the housing market, but it’s not going to address the need at the low end,” said Novak, who has three decades of experience in the development of affordable housing. “There is sort of a disconnect there.”

“Right now, you still need to a take a conservative approach in my opinion,” said Perry Di Loreto, owner of Di Loreto Homes, who witnessed the recession hammer the construction industry.

He considers the Reno housing situation a normal cycle, driven by the area’s growth spurt and increased awareness about its quality of life — a mid-sized city with Lake Tahoe and other outdoor gems only a short drive away. The prominent developer, however, said he won’t engage in any speculative homebuilding practices. He wants to build houses that families live in and call home.

His rule of thumb: “We won’t build homes that we don’t have sold.”

The cautious mindset doesn’t surprise Hill, who owned a concrete company prior to joining the Governor’s Office of Economic Development.

“To some extent there’s going to be a natural lag because we went through the recession that was hard on everybody in the construction industry,” he said. “There’s going to be a natural hesitation to ramp back up too quickly because the pain of the recession is still pretty fresh in the construction industry and homebuilders industry.”

Time will tell how high housing prices continue to climb. As for overcoming some of the related problems, that will take time, too.

While awareness has grown, reaction to the problem hasn’t happened as rapidly as Kazmierski would have liked. He blames the sluggish response on a combinations of factors, including residents’ reluctance to add higher-density housing and government entities’ inability to fast-track projects through the permitting process.

John Graham, president of the Reno-Sparks Association of Realtors, said the community needs to keep thinking creatively and continue efforts to refurbish old buildings into housing, find infill opportunities where new residences can be constructed within the urban core and incorporate affordable housing in each development project.

It’s a sentiment shared by Reno Mayor Hillary Schieve, who said she wants to treat developers like partners as the region grapples with this problem. There are practical solutions, such as changing zoning to allow higher-density residences or finding suitable land parcels for development, that the city could pursue, she said.

“I also think that we have to treat developers like partners,” Schieve said. “I think that’s really important. They spend a lot of money building such projects.”

On Friday, a bit of good news arrived in Schieve’s email inbox: Construction activity had bumped up the rental vacancy rate to above 2 percent, which could curb rent increases if the trend continues. The city recently added 112 rental units and has another 3,000 units in the construction pipeline.

Ultimately, Kazmierski hopes the region avoids a “drive until you can afford” mentality as much as possible. Fernley and other farther-flung locales like it, he said, should be an option but not a necessity.

Still, Cal Eilrich’s peaceful habitat — a place that lacks big-city amenities but boasts basic shopping and a small-town feel — will likely buzz with construction noise for the foreseeable future. And, as a homebuilder and a resident, he’s OK with that.

“There are always people that are resistant to growth,” he said. “I live here, too. I’m for good, positive growth. Any community that is not growing is dying.”

Three years ago, no new homes were built in Fernley, the city manager, Daphne Hooper, said. Last year, the city added 160 single-family homes to its ranks, a number she expects repeated in 2017.

The growth could mean it will take Fernley residents a tad bit longer to navigate the city’s roundabout toward the Walmart and grocery store. As far as Eilrich is concerned, that’s a minor inconvenience compared to the congestion Reno roadways may see if growth projections pan out.

“Our idea of a traffic jam is when a traffic light turns red.”